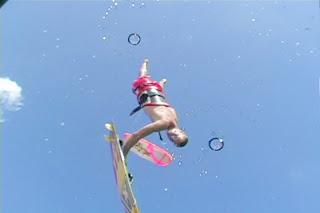 Kiteboarding has jumped to the next leval with helikiting. Your in FLA and you want a desserted beach with some open water. Jump in the heli and in a short while your in the Bahamas and lovin' it! For the vid, Click here.
Posted by Fungod at 7:07 AM No comments: 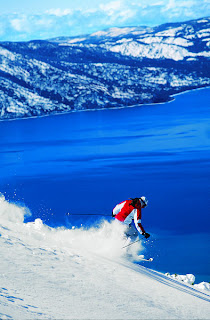 I went up to the slopes in Tahoe for a couple days last week. There was a big storm heading in so we hit the road and got up there before it hit. Had a bunch of friends up there for the week. It was storming too hard to ski the first day but they got about 18" of new snow that day. On Friday we got up to Alpine early and hit it just right. New powder and tons of terrain. What a great day of powder and fun with my best friend Tex. We also met up with my other friends later in the day. There was six of us and we hit the Summit Chiar at the end of the day. The chair can accommodate six so we had a great couple rides and runs. Great fun in the snow!!
Posted by Fungod at 7:39 AM No comments:

Found a couple sites this weekend that I would like to share with you. The first is viralvideochart.com. It takes the top videos from all over the web and puts them on one page. Very cool. The second is lala.com. This site allows you to trade old CD's with others for $1. Great way to get rid of those old CD's you never listen to anymore. The other cool part is the radio section. They have allowed some of their users to create radio stations that are very hip and comercial free. Check it out!
Posted by Fungod at 7:25 AM No comments:

Posted by Fungod at 7:17 AM No comments:

Centuries ago, the "hole in the ocean" was the folklore of grizzled old sea dogs. Today, oceanographers know that the catastrophic phenomena -- which they call "freak" or "rogue" waves -- do indeed exist, and they even have a good idea of what causes the towering waves. While always unexpected, freak waves tend to occur more often in particular areas, such as off the eastern coast of South Africa (where the Waratah disappeared and the Oceanos sunk, as described in the SAVAGE SEAS episode "Killer Waves"), in the Gulf of Alaska, and off the Florida coast. That has given oceanographers vital clues about their origin.

The prevailing theory holds that freak waves can result when strong, high storm waves slam headlong into a powerful current traveling in the opposite direction. The interaction can push together the storm swells, so that their frequencies superimpose, creating one tremendously powerful wave that can reach a height of 100 feet or more. (The "hole in the ocean" describes the deep trough that precedes this steep crest of water.)

Off the coast of South Africa, north-tracking storm waves generated off of Antarctica (particularly when a low-pressure system is settled over the area) slam into the Agulhas current, which sweeps southward down the coast. The rogue waves that are generated severely damage two to three tankers every year. Off Florida, freak waves are born from the interaction of the northeast-flowing Florida current and North Atlantic storm waves butting up against the current.

To reduce the damage caused by rogue waves, oceanographers are trying to develop techniques to predict when and where they'll strike. Scientists at the University of Miami, for example, are using radar images snapped by NASA satellites to chart the formation and location of the deadly waves. Radar measures how light is scattered off the ocean surface, and can produce a picture detailing the height, length, and direction of travel of ocean surface waves -- including the occasional freak wave. The researchers hope eventually to be able to transmit that information in real time to cruise and cargo ships, steering them clear of danger.
Posted by Fungod at 7:44 AM No comments:

A Bunch of Bonehead Moves

Here are some classic bonehead moves.....
Drunken Sailor
Uploaded by h2ojoe
Posted by Fungod at 8:03 PM No comments: 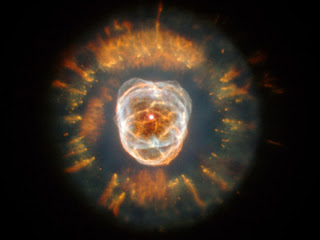 n 1787, astronomer William Herschel discovered the Eskimo Nebula, which from the ground resembles a person's head surrounded by a parka hood. In 2000, the Hubble Space Telescope imaged the nebula that displays gas clouds so complex they are not fully understood. The Eskimo Nebula is clearly a planetary nebula, and the gas seen above composed the outer layers of a sun-like star only 10,000 years ago. The inner filaments visible above are being ejected by strong wind of particles from the central star. The outer disk contains unusual light-year long orange filaments.
Posted by Fungod at 7:14 PM No comments: 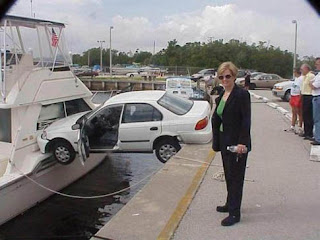 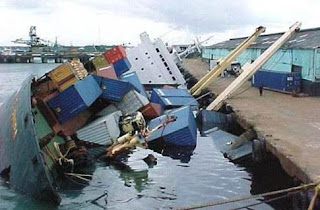 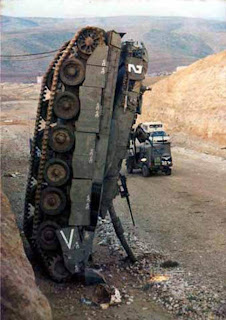 Posted by Fungod at 6:29 AM No comments: