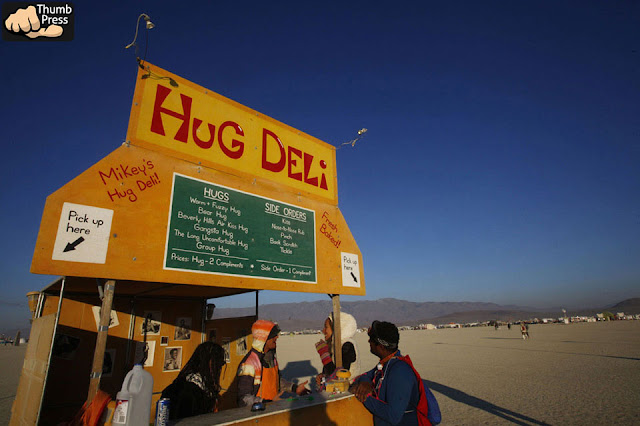 Click the pic for a larger view.
Posted by Fungod at 6:47 AM No comments: 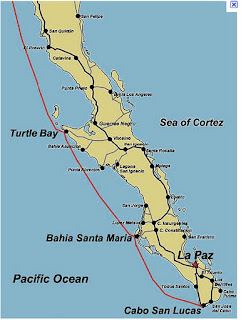 I am departing this week for San Diego and the start of the Haha rally.   The boat I am joining is an Islander 36 with a crew of 4.  The rally begins on Monday and will take us 750 miles down the baja coast to Cabo San Lucas.  You may remember that I did this trip last year and had a blast.  Some of the folks I met are going again and it will be great to see them again.  I had two amazing highlights last year that I will always cherish.  Waking up to 1000 dolphins around our boat and swimming in the bioluminesent waters of Santa Maria Bay.  Plus the volleyball and the beach parties.  I hope we can top it this year!  I will return on Nov. 7th and start posting the logs of the trip.   Wish me a Bon Voyage!
Posted by Fungod at 7:49 AM No comments:

Kayaking with Blue Whales in LA

Posted by Fungod at 2:24 PM No comments:

Bonehead Move of the Weekend Posted by Fungod at 7:56 PM No comments: 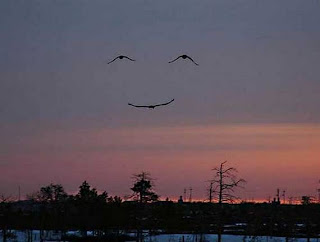 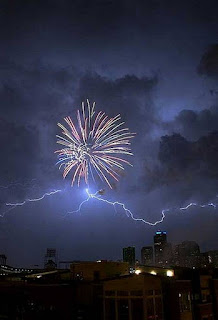 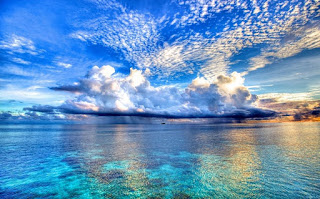 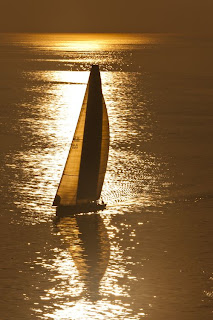 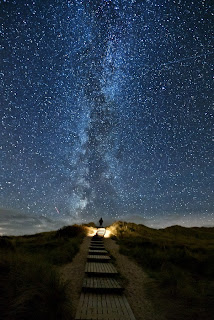 Posted by Fungod at 6:22 AM No comments:


MUNDAKA 24H from aritzaranburu.com on Vimeo.

Posted by Fungod at 6:12 AM No comments:

At the Pool - Great vid!


Kite Park from EASY RIDE on Vimeo.
Be sure to go full screen.  via Sailing Anarchy

Posted by Fungod at 4:52 AM No comments:

Any Downeaster owner who has spent any amount of time berthed in a public marina has answered two questions many times:“How big is that?” and “Is that a wood boat”? A generous bowspirit,hefty beam,wineglass transom and the hull’s simulated planking lines are responsible for the general impression that these beauties are bigger and older than they are. The gold-washed navy blue or forest green clipper laminate on the bow is a further contribution to the salty image of this classic ‘70s sailboat.
Created in California with a Maine sailor’s sensibilities in mind,the Santa Ana-built Downeasters evoked nostalgia and tradition when introduced in the 1970s. That’s even more the case these days.
There are three sizes in the DownEast Yacht line, 32-foot, 38 and 45. The vessel was conceived by Bob Poole, a California transplant from the East Coast. The boat’s designer is Henry Morschladt of Newport Beach, California. A well-known naval architect,he incorporated military marine and Loyd’s of London specifications into his exacting craft. A sturdy, seaworthy cruising vessel in which no bond or seacock was compromised is the result. The DownEaster Yachts Inc. company operated from 1975-81, officially ceasing to exist in 1983. Available statistics indicate 412 models were produced, with 125 still currently registered by hull number. One hundred and thirty-four were DE 32s,and 27 were DE 45s. DE 38s led the pack,with 251,11 of which are erroneously listed as “41s,” again attesting to the “big” image this classic sailboat engenders.
Downeaster Yacht models featuring cutter,ketch and schooner rigs were offered, along with an amazing array of options above and belowdecks that contributed to the uniquely individual personality of each boat,including a few pilothouse models. A tiller was standard on the 32-foot in 1977 and an emergency tiller system was available on all models.
A Farymann 24hp diesel was standard issue by the late 1970s. Underpowered? It’s considered a legitimate question and many a Downeaster owner has upgraded,most commonly to a Yanmar 27hp. But no one argues with the original engine’s chief advantages,a thrifty appetite for fuel and an ability to be hand-cranked. With an approximately 900-mile cruising range and a viable way to get the engine going if the starter poops out,it’s no wonder the Downeaster is known as a “go anywhere” boat. The engine room, however, is far from ideal. As with the rest of the vessel, it appears to be bigger than it is but requires a variety of contortions to gain access. Another drawback is the bilge. Unlike Lin and Larry Pardey, we won’t be storing wine down there. The access is comprised of two tiny hatches forward and a little Lucite window in the drip pan under the engine.
Novices on the water find the Downeaster forgiving and even willing to take punishment, while veteran sailors have learned to make the most of her sail plan. The California-built sailboat has migrated all over the world, including at least three global circumnavigations.  Boasts of 9-12 knot top speeds aside, a 6-7 knot cruising speed provides a pleasant ride without undue heel. These boats weren’t built to race and are impervious to light wind,which can provide many opportunities to experiment with the furling headsail or throw a spinnaker up,an enjoyable anomaly in this class of vessel. In 15-25 knot winds the modified full keel, with keel-hung rudder,provides superb balance,even in rough seas, under sail or motor-sailing. Heeling a Downeaster under the rail takes extra effort by an advancing storm front or the adventurous sailor looking for a thrill. The same care given to the boat’s core infrastructure is apparent in the strong rigging and good-quality winches. 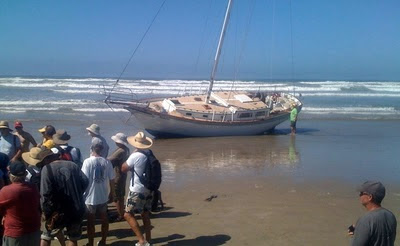 In last year's Baja Haha, we had a sailor fall asleep and the auto pilot took this Downeaster up on the beach at Santa Maria.  She was lost a few days later.

The Downeaster cockpit is decidedly unique,with no coamings from hatchway to rail. It drains well, but can be hard on the back. Ergonomic and aesthetic modifications abound. The wide-open cockpit also provides for easy sheet handling. A full dodger was an available option on the original models and many Downeast sailboats sport an “Arabian Sultan” awning and big cockpit cushions first mentioned when the boat was reviewed by Motor Boat & Sailing in May 1977.
Bigger is also definitely better when it comes to the Downeaster’s cabin plan,which encompasses lavish use of teak, 70s-style spindles and cabinetry,a faux leather cabin ceiling and a clever fold-up table that accommodates two dining couples comfortably. Funky 1970’s touches notwithstanding,the 6’9” headroom defines the feel of the Downeast interior,adding light and spaciousness.
The 32-foot Downeast theoretically sleeps six,with up to three salon bunks and a quarterberth aft starboard. Because the vessel allows for singlehanding,many owners feel confident and cozier with appropriate modifications for couples or solo sailing. The original models have two doors closing off the V-Berth and adjacent head from traffic in the main salon. The U-shaped galley with beveled stove,refrigerator/freezer and icebox,and double sink is practical and efficient. Storage includes two well-ventilated hanging lockers and numerous cubbies.
Early reviews of the Downeaster line said the boats were probably “overbuilt.” In this day and age,that’s a compliment. The Downeast is a boat for sailors who appreciate  quality workmanship with attention to detail.
No review of this impeccably crafted line would be complete without comments from “The Group,” my nickname for the Downeast sailors who enthusiastically and coherently share information on a regular basis on the “unofficial” Downeast website. The site was established five years ago and has weathered the perils of the latest developments in electronic technology. The site, at www.downeaster.net is a common-sense resource that is as user-friendly as the boat it celebrates. There are 28 registered members on the site,with many more participating,including Todd Iorio,who provides hosting services for the site,Gerry O’Donoghue,website administrator,U.S. Rep Jim Saxton,of New Jersey,and Tony Strong,all DE38 owners. Strong actually “built” his 38 after securing a bare hull in 1988. In 1997 her sailed her to Hawaii and also cruising to Samoa and Tonga. At least three Downeasts have completed circumnavigations in recent years,again attesting to the “go anywhere” legend.

From Cruising World.
Posted by Fungod at 7:43 AM 1 comment:

Posted by Fungod at 4:48 AM No comments:

Bonehead Move of the Week

Posted by Fungod at 8:27 AM No comments: 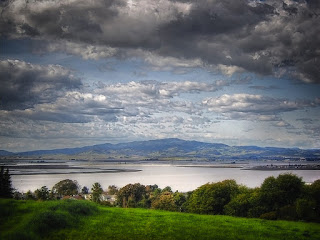 Tex, my golden Kona and I have just returned from a glorious trip up the Napa River to downtown Napa.  We started the trip with a spinnaker run up San Pablo Bay to Vallejo.  We hit the Napa River and the wind was perfect for sailing up the river.  The wind direction and river orientation allow us to sail the river without tacking.  It's amazing to be sailing so fast on such a narrow river.  We reached our destination of the Napa Valley Yacht Club at 5:30.  We headed up to the bocce court for a spirited best out of three.  Then it was on to dinner on the boat along with some nice wine.  Monday we were up early for some wine country appointments.  William Hill, Luna, and Reynolds.  It was about a 30 minute bike ride to the wineries.  We had a great time riding in a mist like rain.  Monday night it rained so we hung out at the boat with a nice dinner and some Saturday Night Live.  Tuesday we had to fix some flats but not too worry we made it out about 11am for our next round of wineries.  My niece Julie showed up at one of the wineries and joined us for a few days.  She is on a road trip from the east coast.  That evening we had a nice time hanging on the boat with some more great food and fun.  On Wednesday we moved the boat to the Carneros region for more wine tasting.  Julie met us and we headed off to Mueller winery and had a great time chatting with Julius as he poured us some tasty tidbits.  He mentioned that we could ride our bikes thru the winery for a nice short cute to Etude.  That was cool.  We had a very nice taste at Etude and then got hit by a huge rain storm.  We retreated to the boat for lunch and then headed out by car to Artesa Winery.  One of the most beautiful wineries in the area, and the wine was good too.  The next morning we headed back to the bay with a nice motor down river.  We hit San Pablo Bay and there was a big storm off the starboard beam.  We heard thunder at one point.  It was heading south and soon it found us and hit us with a 30 minute downpour.  We had the proper clothing and no problems.  Once we got to the Richmond Bridge, the wind piped up and we sailed out to Angel Island.  The Blue Angles were practicing and we saw some nice flyovers.  We headed to Sausalito after a beautiful sunset and tied up at Schoonmaker Marina.  Spent the night there and it was a quiet one.  Up early as they were working on the dock.  We headed out for breakfast floating off the GG Bridge.  Beautiful.  The breeze came up from the east and we headed to a beach on Angel so Kona could get a run.  He loved it and so did I.  Around noon the wind came up for real and we headed out to the Pacific for some wave riding fun.  On our way back, a fishing boat passed and slowed.  We caught up with them and they asked if we would like a salmon.  We said sure.  Tex went on deck and made a great catch of o big fish!  That was classic!  Then it was back on the bay for the Blue Angels show.  We sailed and watched their intricate display of acrobatics.  Back to our slip in Emeryville after the show, we took a quick nap and then cleaned up the boat.  It was another great trip up the Napa River!!
Posted by Fungod at 10:27 AM 1 comment: