I grew up surfing back east in southern Delaware.  When I moved to Nor Cal in '81, I found my home with 8-10 foot waves in Carmel and Santa Cruz.  My first tube ride was in Zuma on shrooms.  What a ride.  They say that getting tubed is like returning to the womb.  However, this is a womb with a view!  Sorry, old joke.

Another fun voyage to the Delta

Tex and I took off Monday for 40 mile run to the Delta.  Hana's first big sailing adventure and she did great.  We were up near Benicia and I knew we needed to get her on land for some relief.  As we entered a close by marina, the depth went from 30' to 4' in a second or two.  Stuck pretty bad, I was able to use the engine to turn us into the wind and move us back to deep water.  We continued onto Pittsburgh where we got in barely and docked.  Hana was very happy to see grass and a park nearby.  Off the next morning we had some wind but decided to motor as the river bends so much making it difficult to fill the sails.  We had a reservation at Delta Bay Marina and came in slowly as we did not want to get stuck as we draw 6.5'.  We made it in and hailed the owner who showed us a nice 40' slip.  With a park across the street, Hana was a happy sailor.  Normally we would anchor up here but with a puppy, being able to access the land is important.  Next two days it was off to Potato Slough for some swimming in fresh water and relaxing.  We would leave early and then return to the slip at night.  Meet some folks there that were from the Richmond Yacht Club.  The kayak rides thru the tules with Hana were fun.  We found a patch of grass for her on a small island and that worked well.  Headed back on Friday with a 12 hour motor back home.  The trip was bittersweet as Tex and I have been cruising together for the last 20 years, including our now famous voyage to Ztown, Mexico and back.  Tex has decided to move back home to Tennessee for his retirement.  He says he will be back to visit and go sailing sometime in the future.  We hope so!! 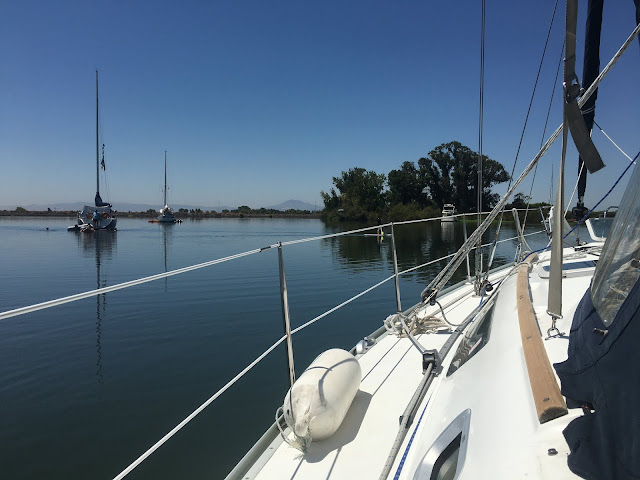 Potato Slough with Mt. Diablo in the distance.

Posted by Fungod at 9:34 AM No comments: