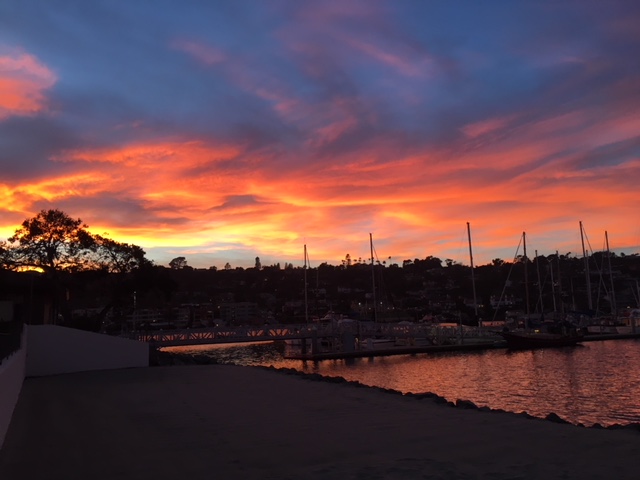 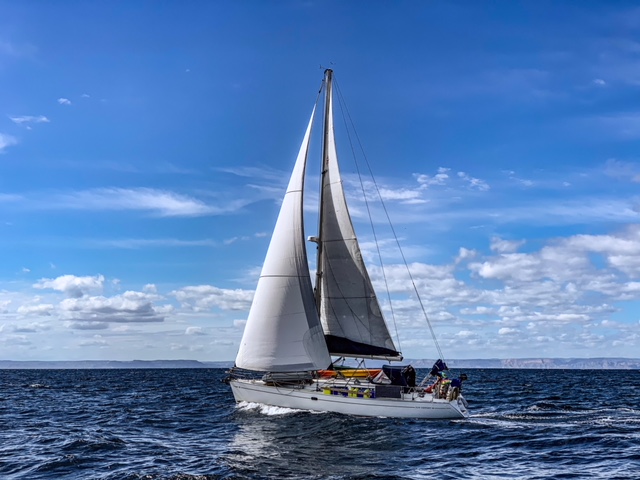 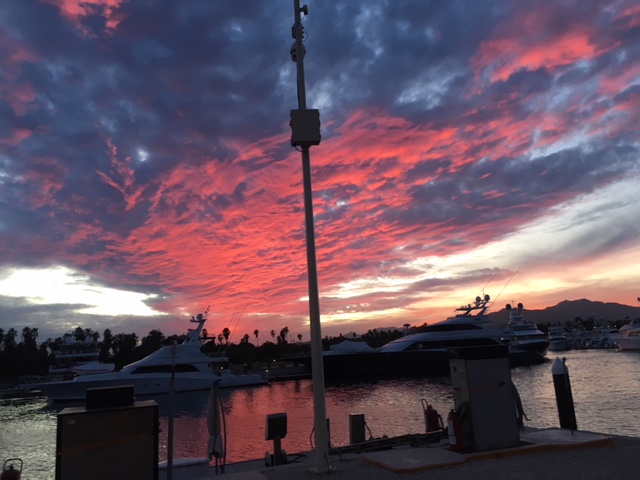 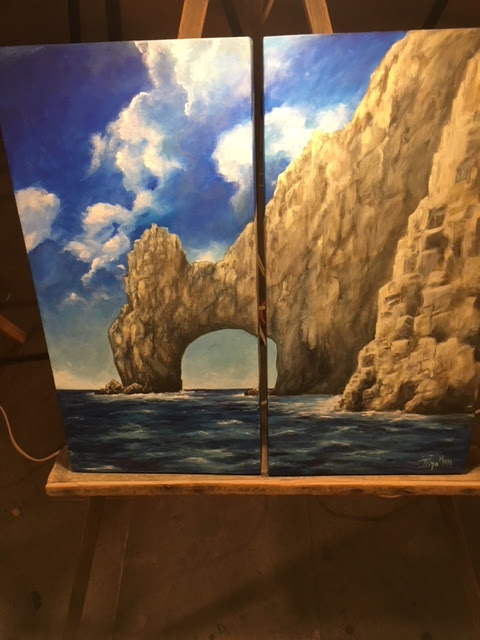 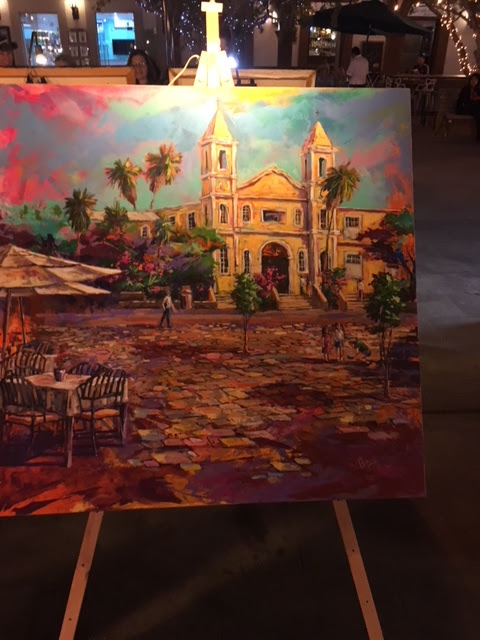 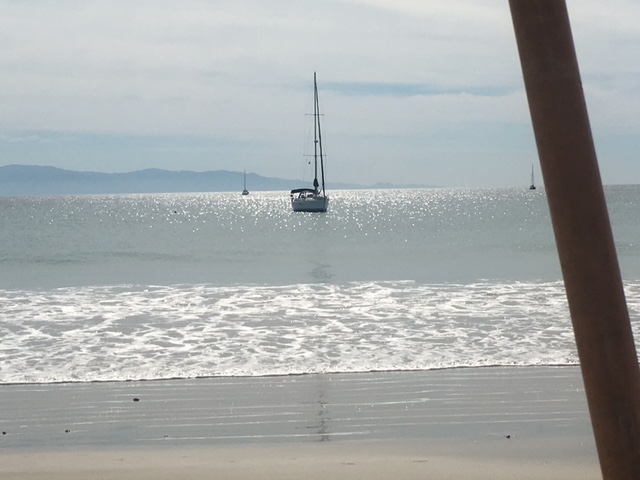 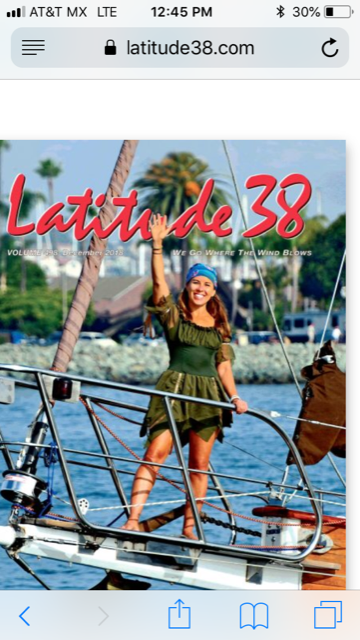 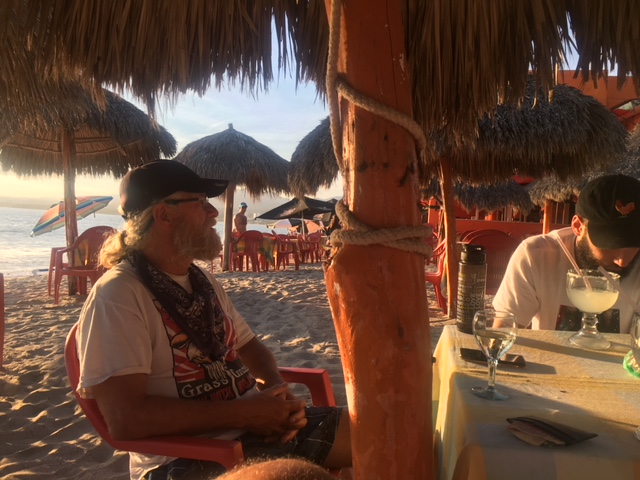 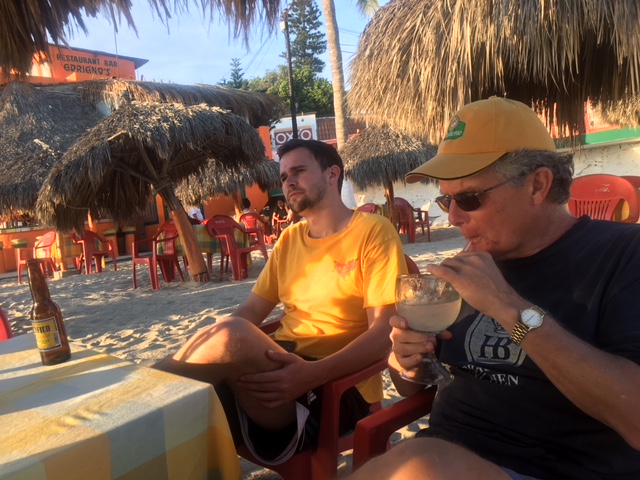 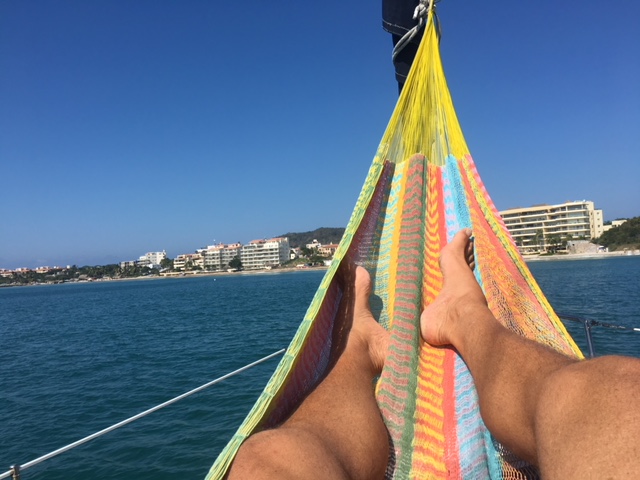 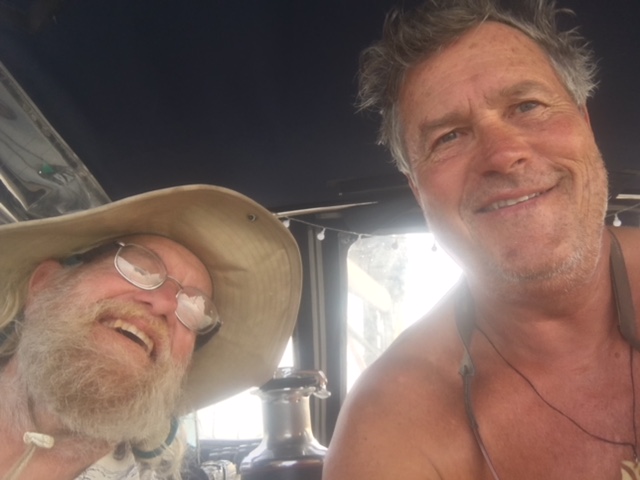 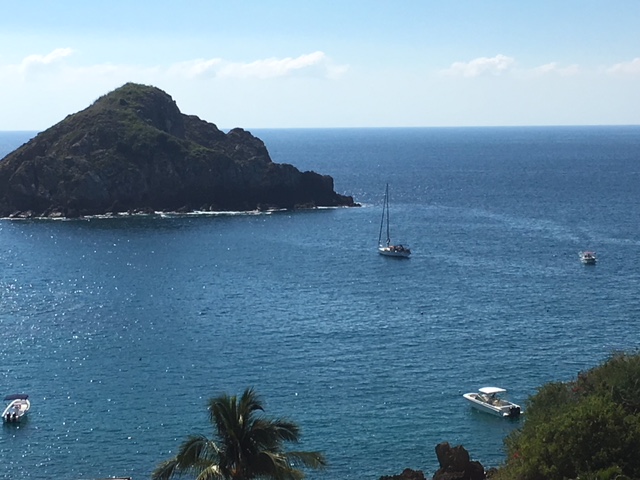 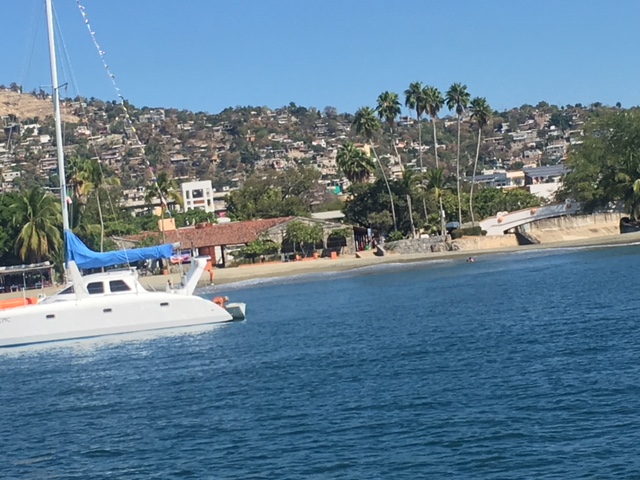 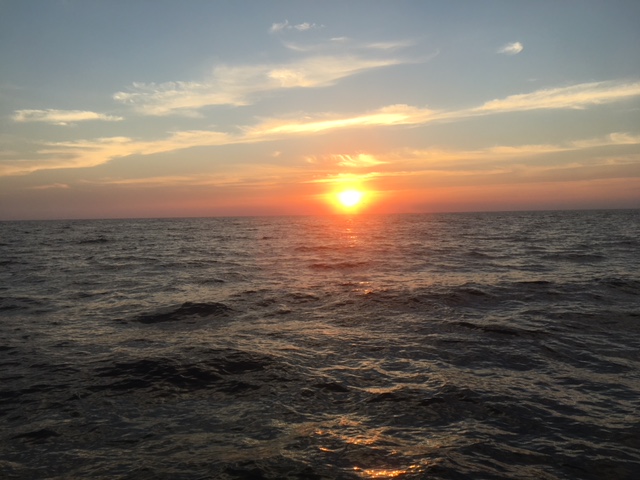 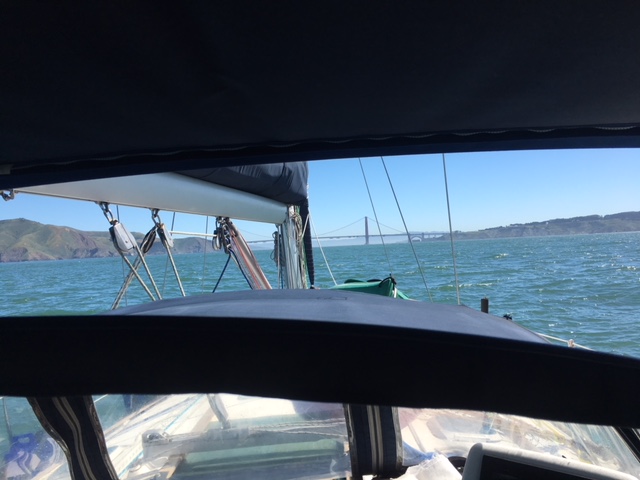 Posted by Fungod at 8:35 AM No comments:

We departed Maz with a run across the Sea of Cortez.  We had a couple days of great sailing all the way to San Jose del Cabo.  We arrived at daybreak and took a nap!  I wanted to show Sean this cute town so off we went to get some food and check out the artwork.  We departed on Wednesday for the famed Baja Bash.  They call it the bash because you are going against the wind and waves and it can be a long slog up the 750 mile coastline.  We topped the fuel off in Cabo and took off.  We would be motoring a lot over the next 9 days.  Our first priority was to make the 400 mile run to Turtle Bay and get fuel.  About 130 miles out of Turtle we hit some big winds and could not make any headway.  We put up some sail and sailed in high winds for the next several hours.  Finally it calmed down and we continued to motor.  Next day we had more of the same and sailed a bit before the winds died for the evening.   We made it to Turtle about 1am.  I had been here many times before on the Haha.  I lingered in the cockpit and reminisced about the good times we had in this beautiful bay.

The next day the fuel guys were at our boat early to fill up our tank and some deck jugs.  We did not have much cash so we waked thru the village to the owners house and put the bill on our credit cards.  We had a nice lunch at Maria’s Restaurant overlooking the bay.  All the guide books give you strategies on when to depart the nortoriously windy cape.  We didn’t listen and took off shortly after noon.  The winds were light and we moved up the coast towards Ensenada.  We had about 270 miles to go.  We arrived in the morning on Wednesday and checked out of the country here.  The town is crazy about micro brews so we headed to the local pub for some fresh suds.  Auga Mala was a place we had been before.  Great views and nice folks.  Then we hit the motherload: Lucky 4.  15 breweries in one spot.  I had a few nice porters and we enjoyed the ocean view.

We departed at midnight for the 60 mile run to San Diego.  Upon arrival in the US, we are quickly approached by the Coast Guard.  They wanted to know where we were headed.  I told them the police dock for check in.  They allowed us to continue and we arrived about 12noon.  Nice to be back in the USA after 5 months in Mexico.  We checked in with customs and then anchored near the beach at La Playa.  On Saturday, my childhood best friend Andy joined for some drinks at the pool.  He was visiting from Reno.

We departed a day early as there are some big winds heading our way.  We made to Santa Barbara after a 170 mile motor.  About 20 miles out we were boarded by the coast guard for inspection.  My first in 30 years of sailing.  They were nice and it took about 20 minutes.  We passed!  We will be here for a few days as we have lots of wind heading down the coast.  Saturday looks like our best bet to get around Pt. Conception.  Only 250 miles to go!!

We waited four days for the 30-40 knot winds to die down.   Pt Conception is known as the Cape Horn of California.  In heavy conditions, this can be a very dangerous place.  We departed at midnight and hit the point about 7am.  Very little wind and the conditions were ideal.  Only 200 miles to Monterey.  These were tuff miles and very cold during the night.  We saw winds in the mid 30’s for short periods but mostly 20-25 knots of wind on our nose.  We motored for several days and finally into Monterey.  Had a great lunch at a small Italian place near the boat.  Next day we had a 8am departure for a short run to Santa Cruz.  Arrived about 2 and headed to the local brewery for lunch.  Met a cool guy there and took him for a short sail.  To bed early for the 40 mile run to Half Moon Bay.  Arrived in HMB about 4pm and had dinner with my old friends Ed and Yvonne at Sam’s.
We have 20 miles to go to SF!!!  We took off about 6:30 and we hit our first fog of the entire trip.  We cranked up the radar and made it 6 miles up the coast and the fog cleared.  It was a perfect forecast for our arrival.  10-15 knot winds and sunny and warm.  We arrived under the bridge right about 11am.  It was a cool moment to be back on the bay after being gone for 7 months and 3600 miles!  It was a very warm and sweet ride across the bay.  We arrived safely in Emery Cove about 12 noon.

I am so happy we did this voyage on this boat with my crew!!  The motor was the true hero!  We sailed only about 20 percent of the time.  The rest was on our trusty Yanmar 56!   We had no breakdowns and no major repairs on our adventure.  We met a few cruisers stuck for weeks at a time waiting for a part.  We had none of that.  The crew we had were awesome and the weather was nothing short of spectacular.   We had about 7 days of waiting for wind, we consumed 568 beers, we motored 678 hours, 24 friends and family visited and we caught one mermaid.  People ask if I will do this trip again?  I answer with, only if I don’t have to bash for 2000 miles into the wind and waves.  That was not fun.  But I believe we had a pretty good run without the truly gnarly conditions.  I hope to be part of the 2019 Baja Haha (my 7th) but on someone else’s boat.

With my original plan to sail to Australia, we were going to sell the boat.  Since we sailed her back home, my plan now is to partner the boat out with 3 other sailors.  I have two ready to join and will look for a 3rd to make it 4 total.  I am looking forward to spending the next 20 years of sailing this amazing sailboat!  I will post some photos over the next few days.

One last note, I have been blogging on this site for over 16 years.  I thought I would be into blogging during the voyage but I was too busy running the boat and crew and having too much fun to worry about writing.  Plus connectivity was not easy with wifi to upload the posts to the internet.  I did not fancy writing long posts on my phone so the blog took a back burner.  Hope you enjoyed our adventure!!