We have been in Puerto Vallarta for 2 weeks and it has been amazing!  We have caught up with old friends, my sailing buddy John is here, my son and my nephew Dan have visited, and the weather has been sublime.  Our friends Steve and Pat are over in Paradise Village.  We headed over for some cocktails and a true Mexican dinner.  John arrived from Ashland, OR last Wednesday.  He has been staying on the boat in the guest cabin.  The weather is sooo nice!  60’s at night and high 70  to low 80’s during the day.  Water temp close to 80 as well.

With guests in town, we headed to  Sayulita the day.  This is surfing hangout that has turned in to a big tourist town.  We headed straight for the beach and found a table for 5.  Drinks and lunch ensued. The big frustration on a beach like this the is parade of vendors selling everything under the sun.  We must have had well over 100 vendors approach us in 4 hours.  And the weird thing is, nobody is buying!!  Connor (my son) and I headed to a tent with some space music and 2 masseuses.  We had an hour massage that was amazing for $25.  Headed to the beach feeling very mellow.  We took off at 4 to catch the bus back to the boat.  We missed our stop and ended up in Busseria.  Heads to a palapa on the beach and took in the sunset with a marg in hand.  Played Frisbee with some kids and we had a green flash to top it off.  Dinner at the La Cruz Inn and we were happy sailors.  On Saturday the 19th of January,  We took the boys for a romping sail across tithe bay.  We wanted 3 things and we got them all!  Wind, whales and dolphins.  As we took off, we motored for a bit to charge the batts.  We raised sail and we took off in 14 knot winds!  Perfect.  The thing I love about Banderas Bay is that because it is 26 miles wide, you head out on a 3 hour tack and after the only tack of the day, we head back home.  One tack!  It was very relaxing and we had some great convo in the cockpit.  After our tack, Tex announces, “Oh no!”.  I jump and he says there are dolphins ahead.  100’s of dolphins are jumping our way and under the starboard side.  We identified them as Spinner Dolphins as they were much smaller than the Bottlenose we had been seeing.  Next, we came upon 2 whales again of the starboard side.  Everyone was thrilled with the sail and love the sea mammals.

Sunday it was off to explore downtown PV.  We met Tex and Dan at a bar on the river mouth.  It was very nice.  Bocce on their lawn broke out and I won another round against Tex, John and Dan.  We took a walk into town and found Meurtos Brewery.  Had a brew and watched the AFC Playoffs for a bit.  Historic football history was made.  The had never been 2 over time games in the championship series.  Great games both.  We hit up a street taco that was yummy and the stopped in a beautiful church.  Off to find the best mole of the trip at Gabby’s.  Wow it was good.  If you have never tried the mole, please be my guest and get ready for a treat if you like chocolate.  Today we are off to Yelapa with John.  He and I have done 2 Haha’s together as well as several trips on the SF bay.  We have day sailed over 75 times together.  So an adventure was afoot.  Yelapa is 16 miles south of us.  It is a deep mountain valley with a beautiful bay at its feet.  The only sway to get there is by boat.  If you need to get into town, there is mule service available.  It’s such a cool cove!  Lot’s of tourists during the day and then we have the place to ourselves.  Looking forward to a couple nights here if the waves are coming.  Will send another update soon!  Over and out from Team Aquarius.
Posted by Fungod at 8:25 AM No comments:

Tex and I both flew back to the Bay Area for the holidays.  I returned with with my two sisters and families on the 27th.  My wife made arrangements for us to stay it’s a beautiful resort called Secrets.  About a mile from the marina.We did a couple sails and 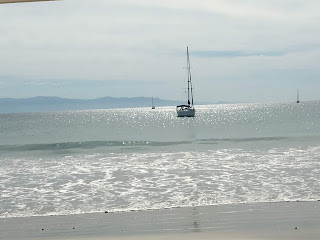 they were very nice and mellow.  We celebrated the New Year with a fine meal and some French Champagne.  Also played a round of golf at the hotel course which was a real treat.  On the 2nd of January, my family flew home and Tex arrived.  We have a passage to Mazatlan plnned the next day.  It’s about a 240 mile passage.  The morning came and we took off about 10:30.  The wind was up and blowing hard.  We got out of the marina and raised both sails.  The wind kept building and soon we pulled the jib in and went with just the main.  A big powerful sail.  Once clear off the cape, the winds and seas built event more.  20- 23 knots was the norm and the waves were big.  Should we turn back?  It was very evident that we could not continue towards Mazatlan as I we would be fighting into 8-10 foot seas.  We fell off and looked down the line.  Dead ahead is Puerto Vallarta.  We decided to abort and head to PV.  It would be a 300 mile passage.  We shortened our watches and it worked like a charm.  During my last 1-4am watch, , a bright light appeared ahead.  It looked like a light on a mast of a sailboat.  This light indicates that the vessel is under motor.  I look again and it is headed for us.  I was about to wake Tex up when I thought what if that is not a motor light.  I whipped out my Star Walk app and sure enough it was Venus coming over the horizon.  Collision avoided!  We reached the outer tip of Puerto Vallarta after a 50 hour sail.  We anchored at the lovely Puna Mita and settled in.  On Sunday, we motored over close to the beach and went ashore for the first time in 3 days.  We had a beer and Tex met up with a friend from Tinder.  Nice gal.  We headed back for a nap and dinner.  Next morning we were off to Yelapa.  We had some decent winds too get us there.  As we pulled in a panga approached and told us he had a mooring ball for us.  We hooked in and those winds had kicked up some waves and it was a very folly anchorage.  We headed into the beach and made a glorious landing that put us both in the water briefly.  Oh well.  We headed over to a beachside restaurant and a bocce game broke out.  We even had the waiter play a game with us in the sand.  I prevailed and won another best of 3.  Hit the hay early and we took off the next day before 9:30 as the boat was rocking.  Hit some nice bays down the coast as well as Los Arcos but it was very busy with lots of other boats.  Motored
to La Cruz in a few hours and set our anchor among 25 other boats.  We will be here for a couple weeks as we explore the bay and wait for our friends and family to show.  All is well aboard Aquarius!