Down to the wire...two weeks to go.

The water maker has been installed and we plan to sail today!  Mike has arrived from NJ and we are pulling all the last minute items together.  We have a huge sailing weekend coming up.  Friday we will meet friends in Sausalito.  Saturday is a bon voyage sail with a bunch of friends.   Sunday we head to the ball park for a Giants game.  Monday we will sail the bay and then head home.  Next week we put our best foot forward and finish off loading the boat for our almost 8 month trip to Mexico and back.  I can't wait!  We will be blogging here while on the water so stay tuned! 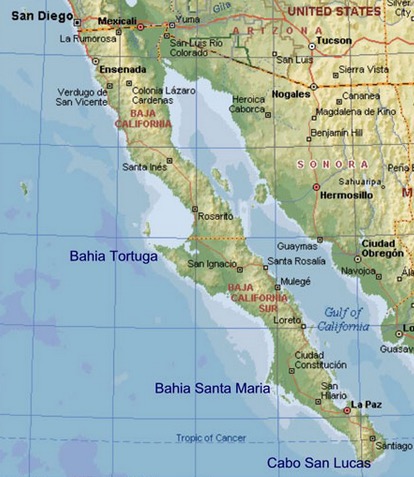 Our southbound itinerary is below.

We depart in 30 days folks!  I have one last project that will be completed next week.  My crewmate Mike will be here for 2 weeks prior to launch so we can begin loading the boat with all our gear.  We will be blogging down the coast so tune in again soon!

Posted by Fungod at 9:06 AM No comments:

Here is a look at some of the hazards on the SF Bay.  Everytime we sail out of Emeryville, we have to deal with the dilapidated Berkeley Pier.  2.5 mile of a mainer's nightmare!  Here are some others:

"Rockin" in the free Bay

9-11 minutes
As printed in: Latitude 38 – Sightings
June, 2009
In San Francisco Bay, there are rocks and then there are Rocks.
Alcatraz has long been known as The Rock, even though it’s an island.
Likewise, racers often refer to the Farallon Islands as the Rock Pile, or Southeast Farallon as the Rock. We’ve also heard Red Rock called ‘the Rock’ even though – again – it’s really an island.
Now that that’s out of the way, we can address the interesting query from a reader about where the ‘hazard to navigation’ rocks are in San Francisco Bay, and which ones sailors should be particularly concerned about. Oddly, this is the first time we’ve ever gotten this question and it took a bit of head scratching to come up with a list, since not all of the ‘hittable’ rocks are noted on charts, and not all notable rocks are hittable. Anyway, here’s what we came up with.
The Berkeley Reef – While the entire area from Cesar Chavez Park to Brooks Island is hazardous and off-limits there is a particularly nasty rock located Northwest of the Berkeley Marina, about a third of the way to Brooks Island. Normally just below the surface, it’s exposed only during extreme minus tides. The rock itself sits just East of the green piling marker (FL G 2.5s 13ft 3M “1”). At night, this light can be quite dim and is very easy to miss among all the background city lights. Warning: a strong westerly combined with current and tide can put you into the reef right out of the marina!

The Berkeley Pier – It presently extends 2.5 miles with a very dim and nearly indistinguishable red marker that blends into the cityscape at night. Currently, only the first 3000ft of the pier are maintained.
Beyond that is a 50ft gap for the passage of small boats then broken pilings between the ruins and beneath the surface that could impale your boat.
Blossom Rock – The sailing ship Blossom is hardly the only ship that came to grief on the submerged rock off the northeast ‘corner’ of San Francisco. But her 1826 demise gave the rock its name. Roughly 180 feet long by 100 feet wide, and lurking only a fathom underwater at low tide, Blossom Rock would continue to sink or damage ships for almost another half-century before a bid was awarded to blow the thing up. In a hugely elaborate scheme – and a hugely popular public event – a giant cofferdam was erected around the rock, the water pumped out,
23 tons of blasting powder (in barrels) placed and, on April 22, 1870, the switch thrown. The ensuing blast sent tons of mud and water high into the air, and was followed closely by the cheers, bell ringing and shots fired into the air by the estimated 50,000 to 60,000 people who had gathered on land and water to witness the event. Today, the Blossom Rock buoy still marks the spot, but only deep-draft commercial ships need worry about the 24-ft depth over what remains of the rock itself.

Don’t say we didn’t warn ya!

Posted by Fungod at 5:49 PM No comments: