Abby Update - Her Rig is Down 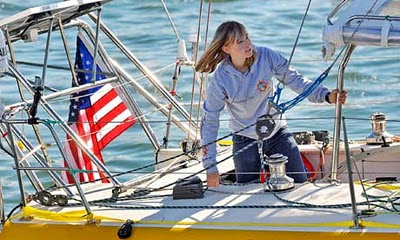 The 16-year-old Californian girl attempting to sail solo around the world has been found alive and well following a desperate overnight search in a remote part of the Indian Ocean, her parents said today.

Laurence Sunderland said rescuers on board a chartered Australian airline made contact with her earlier today and that she was alive.

"She's fine, the boat's afloat and she's on it," he told the Australian Broadcasting Corporation. "It's huge, fantastic, exciting news."

Abbey's parents lost satellite phone contact with her after she had told them she had been repeatedly knocked down in 60-knot winds and 50-foot waves, about 2,000 miles east of Madagascar.

"Wild Eyes is upright but her rigging is down. The weather conditions are abating. Radio communication was made and Abby reports that she is fine!

Visit msnbc.com for breaking news, world news, and news about the economy

Glad she's going to be okay. Who wouldn't be glad of that? But I'm sad that she's stunt-sailing. Puts potential rescuers at risk.