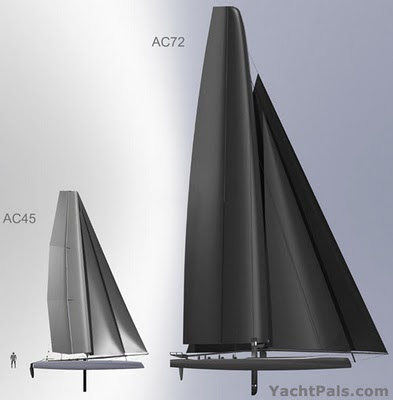 Sailors from around the world rejoiced at the news the the America's Cup is coming to San Francisco in 2013. This is the biggest sailing event in the world and now it will be in our home waters. This will not be your fathers America's Cup as the boats are 72' cats that can race at speeds up to 30 knots. This will be the Grand Prix of sailing. With the natural amphitheater the bay provides, it will open up the races to thousands of spectators on land. Our waterfront will become the destination it was meant to be. And sailing will benefit with the amount of interest that only these races can create. Never in the nautical history of SF has their been bigger news than this. Thank-you Golden Gate Yacht Club and thank-you Mr. Ellison! We can't wait for the races to begin!!

The tentative dates for an America’s Cup in 2013 are July 13-September 1 for the Louis Vuitton Challenger Selection and the Defender Selection (if we have multiple defense candidates). Match dates are September 7-22, 2013. The racing area, loosely defined, lies between the Golden Gate Bridge and the Bay Bridge. It's going to be HUGE!
Posted by Fungod at 6:48 AM

No one will see it. The fog in the summer.

Not sure if you are a sailor, Peter, but I disagree. I have sailed the bay for the last 30 years and yes there are days when it is very foggy, however, there are plenty of days where the fog stays outside the Gate or is at higher altitudes off the bay. The final match races will be held in Sept. when there is very little fog and perfect conditions. I am finding by reading comments in other forums that there is a lot of negativity about the Cup and that people are not excited about it. I know it's over three years away, but I have a feeling that these races will transform the waterfront as well as the sport of sailing in many ways. I spoke to a guy who lived in San Diego during the 1988 Cup. He said it was a fantastic experience and he loved watching the races from his office window. I think we should all keep an open mind and look forward to this once in a lifetime experience in our own backyard!!

Craig, I must admit to being one of those bloggers who's been having some fun at the cup's expense.

I wrote a rather goofy post (very unusual for me) that was really more about the overuse of the tired and ambiguous phrase 'natural amphitheater' than it was about the Cup.

I've also done a few posts that were somewhat cynical (very unusual for me) about Larry Ellison's motives and ruthlessness in 'negotiating' terms that were suitable to him. I think a lot of his behavior so far is something the sailing world shouldn't be too proud of. Hopefully, it's not a prelude to how this Cup will be managed and conducted.

That said, I think AC34 could be a great event for sailing and for SF if the sailors are ever allowed to compete fairly in evenly-matched boats. Nothing would be cooler than seeing scary fast high-tech boats tearing up the city front with the whole world watching.

But I'm still trying to imagine how they will secure the necessary space for the course itself and for what could be the largest spectator fleet in Cup history, smack in the middle of one of this country's busiest commercial harbors.

If they can ever pull that off, it should be fantastic.