We had a great time in San Diego spending over 3 weeks there.  We arrived on the 18th of October and prepared to meet up from one of my best child hood buddies, Steve Peterson.  He is from Delaware and was out for the National Ultimate Frisbee Championships.  It was also the 50th anniversary of Ultimate.  We met him at the beach in Coronado.  There was a beach ultimate game going on.  A bunch of old Frisbee buds were there and it was great to see them all.  I had played at Stanford for 15 years on a club team.  After the tourney, Steve joined us on the boat for a week.  We were docked at a military facility called Fiddler’s Cove Marina.  Just outside of Coronado.  We spent our days exploring San Diego, going sailing and visiting with friends old and new.  Some other buddies visited with Andy, Doug, and a few others.  We also got to hang out with my son who lives in the area.  Connor hosted us for some swimming and bocce.  Our favorite anchorage was just off Coronado Island.

During our visit the Haha was getting ready to take off for Cabo.  We attended the kick off party and had a blast seeing old friends.  My old boat partner and long time friend was there, Arnie.  He had found a boat and was heading out.  One of the funniest lines of the trip happened.  There was a gal there dressed as a mermaid and I was giving her a hug and noticed she had a pierced tongue.  I asked if she knew what they said about a girl with a pierced tongue?  She said yes, that they usually had a pierced clit!  Way too much info!  It was fun to be there and wish the fleet a bon voyage.

We made reservations at the Police Dock on Shelter Island, as I was heading off to meet Bridget in Cancun to celebrate our 25th wedding anniversary.  Tex would hang at the boat for the week.  Our other crewmate Mike had joined a boat on the Haha.  Had a great week in Cancun at a very nice resort right on the beach.  They had a few Hobie’s and I sailed every day in winds 12-18 knots.  Very fun and we had a marvi time.

Back at the boat, Tex and I had a lot to do.  We did some provisioning and some last minute boat items.  Mike did not return to the boat so Tex and I prepared to depart on Sunday for Ensanada, about 60 miles away.  We left in the afternoon.  We had some good winds off Tiajuana and then arrived Monday to check into Mexico.  We had hoped to sail to Cabo but got delayed due to high winds.  That set us back further. We ended up staying a couple weeks.  When we were there, the Baja 1000 was taking place.  This is a motor race thru the desert.  We went over to see the line up and it was a huge party in the streets.  We had some street tacos and enjoyed the celebration.

I was to meet my family in Puerto Vallarta for Thanksgiving so made arrangements to fly out of San Diego.  Stayed at my favorite Haha hotel, the Sheraton at the Marina.  Arrived in PV and joined family and friends for a week of celebration.  Our best friends Frank and Leslie host us there every 2 years and we always have way too much fun.  Volleyball, swimming, big dinners on the property and an awesome resort on the beach!  After a nice Thanksgiving, I headed back to Ensanada.  Mike was not returning to the boat so I put an ad on Craigslist for crew.  Alex responded and joined us in Ensanada.  He has been a great addition and speaks fluent Spanish.  He has been a big help.  We really needed 3 to make this 700 mile adventure work.  We provisioned and hit the coast on Monday afternoon.  We were bound for Cedros Island about 220 miles away.  We motored out and just after sunset, two Orca whales visited us and came right up to the boat.  Pretty cool.  My watch is 3-7 and I get the sunset and sunrise everyday.  It is so nice to get 8 hours off after a watch.  It would have been very difficult to do this with the 2 of us.  So glad Alex joined the crew!  We made it to Cedros and got the fuel we needed.  We took off the next morning for a 270 mile sail to Magdelana Bay.  During my watch we threw out the lure and landed a beautiful Mahi Mahi and had him for dinner.  Yum.  Resting now.

We made it to Cabo and have been hanging out in the bay and the marina.  We depart in a few minutes to San Jose del Cabo and in a few days up to the beautiful islands off La Paz.  I had been out there 2011 on a charter with sailing buds.  Looking forward to warm water and 15 knots on the beam. More soon.  Over and out.

We are looking for someone to join us on the second half of our adventure.
https://sfbay.craigslist.org/sfc/boa/d/sail-in-mexico-with-the/6765337420.html 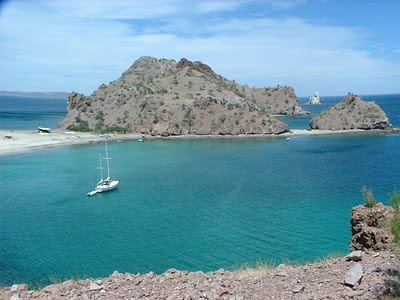