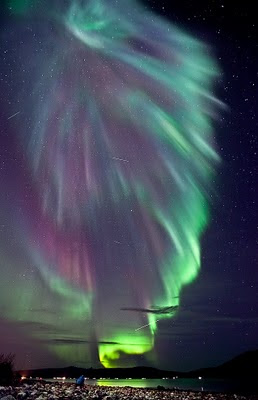 I have seen the northern lights once in British Columbia. It was an awe inspiring moment in my life. This solar energy occurrence is one of the most amazing phenomena I have ever seen. Here is what causes the spectacular light shows: The Sun's magnetic field throws charged particles from its atmosphere out into space. As these particles near the Earth they are pulled in by its magnetic field, which pulls them down to the magnetic poles. Before they can reach the Earth, the charged particles hit the Earth's atmosphere and collide with the gases found there. The reaction between those particles and the gases creates energy, and the energy is given off as light - the Northern Lights. Here is a link to a site with some breath taking
photos.
Posted by Fungod at 5:49 AM

The northern lights phenomenon is just too cool. Thanks’ for the explanation.