Down the Line to Bahia Santa Maria 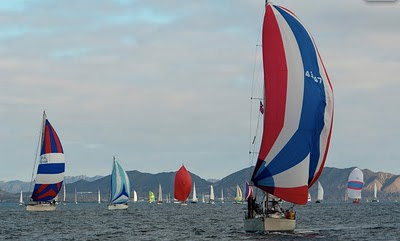 Day 6 - The Rainbow crew was up early for the 8am departure for Santa Maria. There was a bit of wind as we weighed anchor at 0730. The fleet is heading for a rolling start as the wind is light. We are allowed to motor until the predicted 10-15 knot winds fill in. The sky is overcast but the sun is out to the north. We bid a fond ado to Turtle Bay as we head to the mouth of the bay. Lots of spinnakers are already up but there is little wind. The decision is made that the fleet can motor without penalty. The winds donot fill in until about 1545 and at that time it's blowing about 10-12 knots (we have been motoring for 8 hours). The rolling start ends at 1600 and the chute goes up. The wind slowly increases to 15 knots and starts touching 20 before sunset at 1800. Now we are cooking. Lots of boats are catching fish but we only catch some kelp on our line. It was a pretty big piece of kelp, however. Lots of whale sightings too. We have a nice sunset during the end of my watch and it looks to be a very nice night for star gazing as the moon won't be up till after midnight. We are hoping for some good winds to move us down the course towards our next stop.

I have had two amazing watches over the last 12 hours. My night watch starts at 2300 each day. I come on deck and the stars are brilliant . The moon will come up later and in the meantime, the Milky Way is above us. The wind is in the high teens and we are moving along at 7 knots. The seas are pretty flat and the spinnaker is driving us down the course towards Santa Maria Bay. Having a nice chat with Dave and talking about his previous two Haha's. He is a seasoned sailor and this is his first voyage on a cat. He is loving the speed and the down wind capabilities of the boat. And did I mention the speed? He goes off watch and and the skipper comes on deck. He makes a few adjustments and the wheel becomes lite as a feather. We are having a beautiful ride as the red half moon rises slowly in the east. With the moon light shining on the water we are having one of the smoothest runs yet. A dream sail for sure. Off the port stern, I hear the sound of dolphins breathing. Soon they are jumping around the boat and splashing in the moon light. This is the moment I was hoping for. This is magic! Soon I see three shooting stars across the sky. The boat is moving like we are on rails. The skipper agrees that this is a peak moment on the trip. I savor my time on watch and finally at 0300 my watch ends and I go below for a sound sleep. There is a big difference on the sleep side of things on a cat, compared to a mono hull. The cat is flat and you can really get some great sleep. Even at 10-11 knots. On a mono hull you are constantly being pushed from side to side in these conditions. It's easy to become sleep deprived on a mono. I am back on deck at 0700 and the wind is in the low 20's and the seas are lumpy. The sky is clear and it's going to be an awesome watch. The boat is averaging 8 knots with the speedo hitting 10 and 11 on some of the surfs. We are passing mono hulls left and right and the spinnaker has been up for 15 hours. We are flying! I take the helm and it is really getting comfortable for me, even at these speeds. Dave is talking about his perfect boat that he hopes to take around some day. I soak it in as he is the voice of experience. Morning roll call for the fleet is at 0800 and one of the boats has had a wrapped spinnaker for the last 10 hours. Ouch! The skipper mentions that one way to solve the issue is to take a flare and burn the sucker. That will clear up the problem quick! Another boat hit something and is having trouble with vibrations from the prop shaft. All others are fine. We continue on thru a gybe of the chute and the average speed jumps up to 10 knots. What a run. We are about 60 miles from our finish line and on to the next round of beach events!! Need I say we are having a blast as we rumble down the coast of Baja Sur!!
Posted by Fungod at 6:33 AM