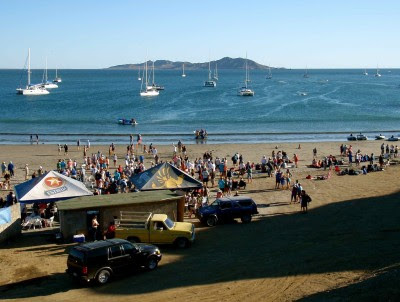 Sleeping great on our cat as I have my own stateroom. My berth is 6'5' in length which is perfect for me as that is also my height. After we finish straightening up the boat, we head off for shore. We jump onto the pier and waiting just off the beach is an ambulance. One of our fleet members has dislocated his hip and is being ferried into the beach for transport to the hospital. We head up to the beach side bar overlooking the harbor and order Pacificos all around. We are joined by two other cruisers and we introduce ourselves. These guys are not having fun. They joined a boat in Santa Cruz, CA and the skipper has not been the peach they were hoping for. He has a C & C 34 and they have had to trouble shoot the boat all they way down the coast. The owner/skipper thinks he has a grasp on how to sail his boat but according to them, he would not have made it much past Monterey if not for them. They are about to jump ship. They vented and told many stories about his incompetence. Many were very funny. We thanked our lucky stars we have a great skipper and a rock solid boat. Let's hope it continues. After a few cold cervezes, we headed into town for a shower. Then over to the baseball game that Latitude 38 had put together. The teens from Turtle Bay played an inning and then the Cabo Pee Wee team and then all the cruisers. It was a great turn out and every one had a blast. Then it was off to the real deal and the World Series in a local bar. We met up with a father/ daughter crew on a Cal 29 and they barley made it down the coast. Big winds and big seas had unnerved them and they were not in very good spirits. We bought them a beer and tried to give them some moral support. Then it was onto the game and a 7 run 8th inning by the Giants finished of the Rangers and the Giants are up 2-0 as the series moves on to Texas. Finished up the night talking with a new friend from Vancouver, Doug and then headed back to the boat. Really looking forward to the beach party on Friday.

The sun comes up bright in Mexico. The day looks perfect and the 12noon start for the beach party is looking good. I cook up some eggs and toast for the crew and we are off to the the beach. It is about a 10 minute ride by panga and it's way down past the anchorage. We arrive an hour early to set up the volleyball and clean the beach. There is lots of plastic and garbage so we take our time and do the right thing. The net goes up, the beers are chilled and the reggae music is playing by the 12 noon start. Some of the locals are supplying the musica and the cervezas. The cruisers are supplying the potluck. It is a blue sky, bright sun day and the temps are in the mid seventies. Soon, lots of folks have arrived and the party is in full swing. We figure a good 300 folks showed up for a grand old time. The food was amazing and I was lucky enough to try some yellow tail that was caught the day before. Along with samples of many more yummy foods. The volleyball game was hot and there was some real talent on the court. We played about 8 games and had some great times. I was the last to leave and what a great day at the beach it was. Back to the boat for some rest and an 0600 wake up for a 0800 departure to Bahia Santa Maria. Can't wait!!
Posted by Fungod at 7:21 AM

Lovely and good fun. I assume and hope the rest of the haha turned out nicely, too.

Hey Pat, Stick around as the trip has some surprises in store.