On The Cusp of a Hurricane - Baja Haha 21 Recap 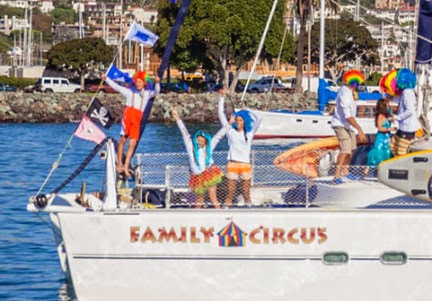 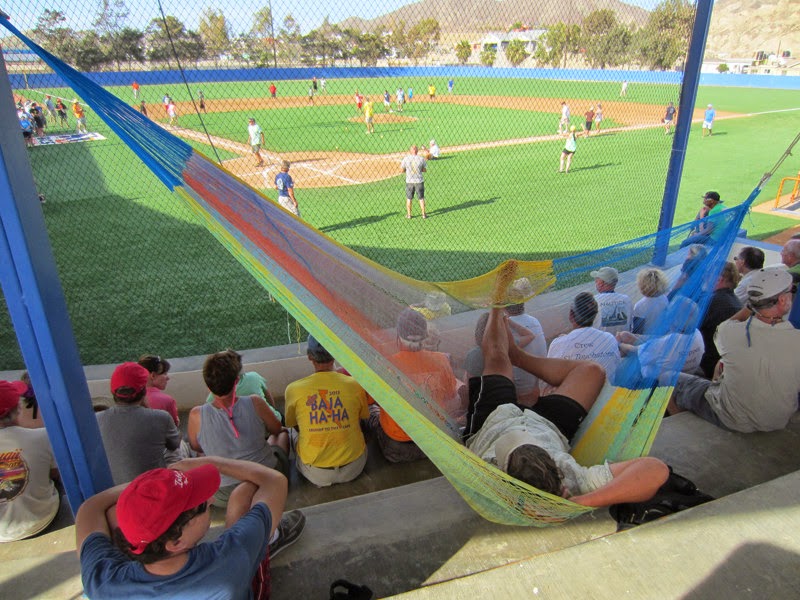 That's me enjoying the game and hammock. 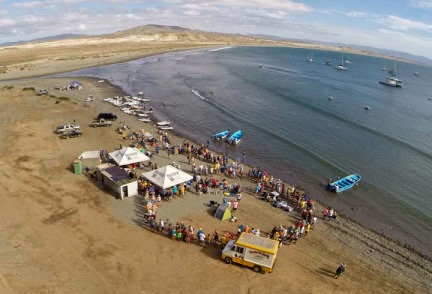 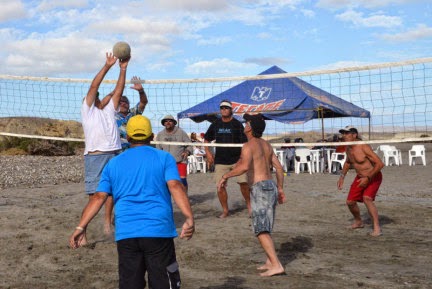 Our adventure in to the 21st annual Baja Haha begins with a recent trip to San Diego.  I was visiting my son in San Diego two weeks before the 750 mile rally from San Diego to Cabo.  I had a few hours in the morning and thought I would head to the docks and see if I could snag a ride on this years voyage.  Sure enough, after knocking on a few hulls I met a gentleman who was heading down with his young family and he needed some help.  The boat is a 42' Waiquez ketch.  I told him I would return the following weekend and prepare to shove off for Mexico.
This is my fourth Haha. In 2010, I joined Rainbow, a 36' cat with a crack crew.  In 2011, the boat I was on failed to make it SD and I joined Go For Broke, a 52' steel cutter that was overbuilt for MX cruising and we motored the whole way.  In 2012, another boat failed to make it to Cabo and I joined a young family with an 18 mo. old boy.  The boat was a 41' cutter.  All the trips were great and I learned much as I am preparing for my own cruise in 2018/19 to Australia and New Zealand.
I joined this years boat on Sunday evening, the day before the start.  The crew is a family of four from BC.  The skipper is a pro mariner who owns a barge and a tug operation near Victoria.  His wife Tina and two kids of 5 and 7 years.  The boat is well prepared and I hope to learn a bunch from the seasoned captain.  In the morning, we head out to the parade and start.  There is little wind so we begin 3 days of motor sailing and very little sailing to our first stop at Turtle Bay.  We arrive and drop anchor at 1am and head to bed.
The highlight of the stay is the beach party.  I am in charge of setting up the volleyball net and bocce.  We are ready to go and I grab some lunch with my friends.  The games begin and the ball is very wet and difficult to hit.  We have a blast anyway and lose every single game.  Oh well, it was fun anyway.  My old sailing instructor is on the trip this year and it is great to hang with him.  We meet many others and the weather is perfect.  Head back to the boat and I am beat and go straight to bed.
The next morning, the Fleet Captain announces we will not be departing due to the hurricane the is churning near PV.  Hurricane Vance is still 700 miles away but we need to be cautious and see what develops.  We decide to go for a sail and the conditions are spectacular.  15-18 kts and sunny.  We catch a few fish along the way and head home.  Steve and I talk in the cockpit after dinner and have a great time.  Soon it is time to hit the hay but I linger on deck and enjoy the moon and stars.
Sunday morning we are hoping to depart but there is alot of uncertainty with the weather.  We are getting conflicting reports about the depression and there is a chance we may stay another day.  The Poobah does a roll call of the 150 boats to determine if they want to go our stay.  The majority want to go but there is a large contingent that wants to stay and be cautious.  About 30 boats decide to depart and head in to the fray.  My skipper is gung ho and we hit the highway.  Officially, we have dropped out of the Haha.  We hit the outside of the bay and it is 15 knots and climbing.  All the sails go up and we are flying.  During the afternoon, we see gusts above 30 and the boat hits a high of over 10 kts,the waves are substantial as well.  We have some fresh fish for dinner and I retire for the evening.  Of all the Haha's I have participated in, this is the most wind I have encountered.  And one of the best sailing days as well.
During my 4am to 8am watch, I head out on deck to watch the stars and listen to some BS&T.  The seas are a bit lumpy as we head towards Santa Maria and the wind is in the 15kt range.  As we finish this leg, the winds come back up in to the low 20's.  We enter the bay near midnight with lots of shrimp boats near our path.  Steve has a great set up at the helm with a chartplotter and radar combo.  We enter the bay with about 20 boats already at anchor.  With the anchor down, we hit the hay.
Tuesday is spent on the boat, resting, swimming and listening to some of my favorite tunes over the newly installed speakers in the cockpit.  Its blowing 22 by 11am and we are having a great time aboard.  The rest of the fleet is beginning to arrive as they started a day later.  The whole hurricane issue was a nonfactor and all of us understand that the fleet captain needed to be cautious as he cannot put the fleet in harms way.  Thursday is the beach bash with a band, food and more vball.  More soon.


Looking back on our sail and day in Santa Maria:
Our sail into SM was sublime.  I joined the skipper on deck about 2 hours out.  Winds had picked up into the low 20's and we were cooking.  Lots of large shrimp boats were in the area and we stayed well clear.  The entrance to the bay is five miles wide so we do not expect any issues. We enter the bay towards the south side and head in.  A perfect landing and the anchor is down.

Tuesday we spend the day on board and the wind is in the 20's most of the day.  I have a two hour nap in the afternoon and it is glorious.  Dinner is nice with some peppercorn steak.  Everyone heads to bed at nine and I stay up and enjoy the fine evening and some tunes in the cockpit. The bay is littered with over 100anchor lights which looks very cool.  I think about life and how wonderful it all is and how fortunate I am to be here.

Beach party today and I head in early.  By 11:30, the net is up and the breeze is there again. Up on the bluff is where the food and band are set up.  Lunch is served and I am the first in line.  During lunch I meet some fellow haha'ers and we have a nice time.  One of the gals is not getting along with her crew and she talks of jumping ship.   About 3pm, the wind has calmed down and I announce the volleyball game.  We head to the beach and the games begin.  Lots of laughter and good times ensue. My friend Steve and Sonny are there and we have some big fun. Head back to the boat for a quick meal and bed.   We depart at 5am and and the winds are 10-12". We put up all 3 sails and motor sail toward Cabo.  Have some fun with the kids and we have a green flash sunset and a full moon rise.  It's my 21st wedding anniversary and I shoot off a quick email to my wife thru sail mail.

It now 530am and I am standing my last watch. Jupiter has been looming large the entire trip.   We should arrive in about 6 hours. It's been one of the best haha's ever and I hope to have many more.
One of the more amusing things that happened was my skipper Steve from the 2011 haha.  He did not join this year but was shading the group.  Just as we depart Turtle Bay, he arrives in the bay looking forward to the beach party.  His favorite part.  He breaks into the morning net asking about the party, sorry you missed it by a day.  Happened again in Santa Maria as we had to push the party up a day due to the extra day we spent in Turtle.  He again breaks into the morning net as we are all departing and asks about the beach party.  Sorry again Steve, you missed it!  I am sure his crew was even more bummed!
We sure had some great weather along the way and we met some great folks as well.  Here's to another successful Haha and many more. Adios amigos!

Great stuff Craigo! Glad you made it safe.

I was imagining Craig Russell, lifeguard at Wilmington Country Club, while reading about your ride situation. I am sure those kids will never forget the large man on their boat that was...just....Too Much Fun! :-)

We had a great time and I shared a bunch of games with them. The were great kids and Billy would come up to me many times during the day and say, "So, how is it going?" Too cute.