After 6 Haha's I decided not to attend this years Haha.  I just purchased a new boat and I felt like I had learned a bunch from my previous adventures down the coast of Mexico.  I found a blogger on line who is posting updates and here is one of his posts form the Haha:


Two days of excellent sailing — 14 to 20 knots of breeze on the quarter, the spinnaker up from sunrise to dusk — let us cover the 200-plus miles from Turtle Bay to Bahia Santa Maria in 37 hours.
That’s the good news. Running without engines and with the autopilot doing the heavy lifting left Meriweather’s battery bank fatigued. Over night, we turned off the Seawind 1190’s fridge and freezer, and during the day, we kept the solar panels on the bimini as clear of shadows as possible. Any extras — phones, computers, Iridium Off! — were turned off and stowed. The peace and quite was appreciated by kit and crew alike, but still, the battery bank lost steam. What was needed was a good long day of no work and plenty of sun to recoup lost amps, and it turns out our landfall, literally in the middle of nowhere, was the perfect place to do it.
Bahia Santa Maria is a jewel. The entrance is around a bold head formed by Cabo San Lazaro and Punta Hughes, sometimes called Punta Huge because of its oft impressive surf point break. We arrived at 2030, and after motoring the last mile or so into the anchorage, dropped the hook an hour later.
A good number of boats were ahead of us, and their anchor lights made the broad cove look like a small city. We dropped the hook in near shore, where the high bluff and beach meet. Thankfully we were well off the beach and the impressive breaking waves that immediately caught our attention in the morning.
Arrival day in Santa Maria was dedicated to rest and relaxation. Kurt, Randy and I ventured out in the inflatable with strict orders from Skipper Steve not to flip the tender and soak his Honda outboard. Instead of attempting a landing in the surf, we motored just out of the swell along the beach, where Kurt and Randy jumped into play in the waves. I remained with the boat and watched the pelicans dive for fish, a handful of surfers catching waves and the nail-biting gyrations of the few inflatables that did try and land on the sand.
I will miss the 25th running of the Haha next year as well.  We will be in San Diego on my boat that weekend but my wife and I are celebrating 25 years of marriage that falls right in the middle of the Haha.  The good news is, we will be meeting a ton of the folks before and after the Haha on our way to Australia. 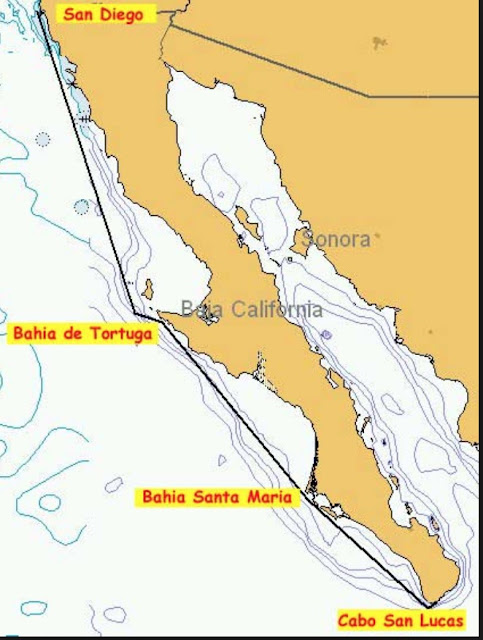