Deep Thoughts from a Cruising Skipper 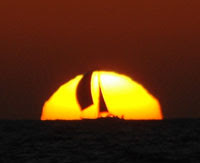 I have been trying to find a Baja Ha Ha blog and finally found one with a blow by blow account of the trip down the coast of Baja Sur. Found one!

People have this image of what living on a sailboat and cruising is: endless beer, endless iced drinks, lounging day in and day out in the cockpit while the wind gently cools the afternoon sun, and so much time with so little to do. Well let me expunge that bogus image from your head right now! It is work my friends and at times hot, dirty, and hard work. It's the side of cruising that cruisers often don't share outside the cruising circles because in doing so, it would make people question the sanity of cruisers even more than they already do. Every boat we know that came down with the Baja ha-ha has a huge list of boat systems in need of repair. This phenomenon isn't limited to old boats, new alike have their lists and there wasn't a captain in the group that hasn't spent some quality time in the last few days folded into some small recess of their boat. I didn't spend the day lounging in the dingy under the shadow of the famous Cabo San Lucas rock with a Coconut drink in my hand, no, I spent the morning in my port sail locker working on boat systems. I was covered in sweat, so much so that it carried the sunscreen into my eyes with a burn. In the afternoon I visited the Port Captain followed by the Bank to pay the $18 check in fee and then back to the Port Captain's office to finalize the process. The Port Captain's office and bank were of course on opposite sides of town and being a cheap cruiser, I wasn't about to blow precious cruising funds on a cab ride, so Jason and I walked. Lori and Amy spend the day finishing up the provisioning process and ended up waiting about two hours at the dingy for us to return form our Government office death march through the streets of Cabo. When I returned to the boat, I discovered that our solar charger was dead so out it came and off I went to ship the unit back to the manufacture for repairs. The work continued as we prepared THIRD DAY for our early morning departure from Cabo. Fuel tanks topped off, equipment stowed and secured, boat organized for sea and the next thing I know the sun is down, dinner is on the table and another day of cruising is over.

So now the natural question is why? Why in the heck are we out here when from this blog report and others you see so much WORK? It's hard to explain but today and days like this are a total blast because it's think on your feet, make it work or else time and I love that. That's the aspect I loved about my first job out of collage at Aeros Environmental traveling around from site to site and dealing with things that would make some people go crazy all day long and then on the way back to the office after a 14 hour day getting a call that would send the test team out to another location with even more challenges and dragons to slay. There's also the aspect of family time and priceless kid education opportunities. Through all of today's challenges Amy and Jason were there to see it and were evolved in getting around the obstacles. Sure it was hot and tiring walking all over town but the kids see on a daily basis that if something is broke or needs to be done, it must be handled and that often the best way to resolve a situation is to do it yourself or at least take responsibility to see that the task gets completed correctly. If you leave the boat water running, then our tanks go dry and we are out of water. If we run out of diesel fuel, we can't motor. If we drop something overboard in deep water, no matter how much we cry, the item we dropped is gone. Cruising is a classroom where the bell never rings allowing you to put off that hard task until after recess. If you have an oil leak, you have to deal with it now or evaluate what the consequences are for putting the repair off. There multiple decision/consequence tests every day on a sailboat and some of them don't just result in a C- or D grade, that the teacher will allow you to take home and redo to save you from a mortal self esteem blow. Getting some of these decision/consequence test wrong can cause you to literally sink.

A great example of the kind of responsibility cruising teaches kids came from a kids-boat potluck just last night. There were 7 kids from 4 boats all playing on the bow and in and out of the boat while the parents sat in the cockpit. The kids ranged in age from 7 to 13 years old and not one of them was wearing a life jacket. WHAT...call child protective services immediately many in our society would scream, but all of these kids understand the consequences of falling overboard form a sailboat at night and they all used the understanding of that consequence to make good decisions about how they moved around on deck. Sure we were watching them, but not hovering over them to ensure that we were taking out all risk from their lives. I don't think I even owned a bike helmet when I was a kid, but perhaps that's what's wrong with me now?

In the last few days the kids have learned first hand how the Mexican system of government and civil service works and that isn't something they can get form a school book. Heck, now that I think about it, if the situation the kids experienced first hand was even discussed in a public school these days the teacher could lose their job for making racially and/or culturally insensitive remarks! The kids watched their dad get rolled for an extra $80 at the immigration office and spend a total of 8 hours processing paperwork from office to office that in any sane system would take no more than 30 minutes, so maybe when they get old enough to make their first trip to the DMV, it will appear a model of efficiency by comparison!

We will be up with the sun tomorrow morning as we leave Cabo and start working our way to La Paz. We will stop for a few days each at two anchorages to break the trip up into easy 40 to 50 mile legs and the kids watches will start right after breakfast. Responsibility 101 will begin with the course syllabus being the Sea of Cortez.

Read the Third Day blog here.
Posted by Fungod at 8:44 AM