“Twenty years from now you will be more disappointed by the things that you didn't do than by the ones you did do. So throw off the bowlines. Sail away from the safe harbor. Catch the trade winds in your sails. Explore. Dream. Discover.”  Mark Twain

“There's no thrill in easy sailing when the skies are clear and blue, there's no joy in merely doing things which any one can do. But there is some satisfaction that is mighty sweet to take, when you reach a destination that you never thought you'd make”  -  unknown

I don't know who named them swells. There's nothing swell about them. They should have named them awfuls.   -Hugo Vihlen

I find the great thing in this world is not so much where we stand, as in what direction we are moving: To reach the port of heaven, we must sail sometimes with the wind and sometimes against it - but we must sail, and not drift, nor lie at anchor.
- Oliver Wendel Holmes

Ships are the nearest things to dreams that hands have ever made.   Robert N. Rose

There is NOTHING--absolutely nothing--half so much worth doing as simply messing about in boats.    Kenneth Grahame

A lot of people ask me if I were shipwrecked, and could only have one book, what would it be? I always say 'How to Build a Boat    Stephen Wright

The pessimist complains about the wind; the optimist expects it to change; the realist adjusts the sails.   William A. Ward

At sea, I learned how little a person needs, not how much.    Robin Lee Graham

I must go down to the sea again, to the lonely sea and the sky.  And all I ask is a tall ship and a star to steer her by.   John Masefield

"The ocean has always been a salve to my soul...the best thing for a cut or abrasion was to go swimming in salt water. Later down the road of life, I made the discovery that salt water was also good for the mental abrasions one inevitably acquires on land."   Jimmy Buffett

"The sea is the same as it has been since before men ever went on it in boats."
- Ernest Hemingway

The lovely thing about cruising is that planning usually turns out to be of little use.
- Dom Degnon

There is nothing more enticing, disenchanting, and enslaving than the life at sea.
- Joseph Conrad

There is nothing like lying flat on your back on the deck, alone except for the helmsman aft at the wheel, silence except for the lapping of the sea against the side of the ship. At that time you can be equal to Ulysses and brother to him.    Errol Flynn

"One of the best temporary cures for pride and affection is seasickness."
- Henry Wheeler Show

Give a man a fish and feed him for a day. Give him a fishing lesson and he'll sit in a boat drinking beer every weekend.   Alex Blackwell

A sailor’s joys are as simple as a child’s.   Bernard Moitessier

The days pass happily with me wherever my ship sails.   Joshua Slocum

"The sea finds out everything you did wrong."   Francis Stokes

“I start from the premise that no object created by man is as satisfying to his body and soul as a proper sailing yacht.”    Arthur Beiser (The Proper Yacht)

"The sail, the play of its pulse so like our own lives: so thin and yet so full of life, so noiseless when it labors hardest, so noisy and impatient when least effective."
- Henry David Thoreau

"Land was created to provide a place for boats to visit."     Brooks Atkinson

The cure for anything is saltwater – sweat, tears, or the sea.   Isak Dinesen

To young men contemplating a voyage I would say go.    Joshua Slocum

A tourist remains an outsider throughout his visit; but a sailor is part of the local scene from the moment he arrives. - Anne Davison 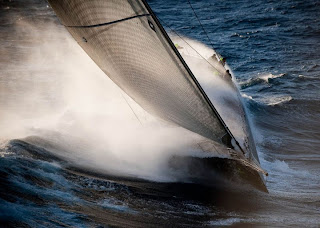 "Men in a ship are always looking up, and men ashore are usually looking down."
- John Masefield

"A small craft in an ocean is, or should be, a benevolent dictatorship."   Tristan Jones

Any fool can carry on, but a wise man knows how to shorten sail in time.   Joseph Conrad

"It isn't that life ashore is distasteful to me. But life at sea is better."   Sir Francis Drake

I enjoy your blog. nice

A ship in harbor is safe; but that is not what ships are for. --John Shedd

First the rain and then the wind, topsail sheets and halyards mind; wind first and then rain, hoist the topsails up again. --Anon

Thanks George and Bob! It's nice to get some comments as I put a decent amount of time into this blog. Getting close to 7 years!

You might want to point your readers to "The Sailing Fanatic" by sailing journalist Christopher Caswell, a 420-page collection of great quotations about sailors, sailing, the sea, weather, racing and even engines. Your quotes, plus many more, are in this book.

Wonderful post, thanks...I thoroughly enjoyed these quotes, thanks for posting and you have a wonderful blog.