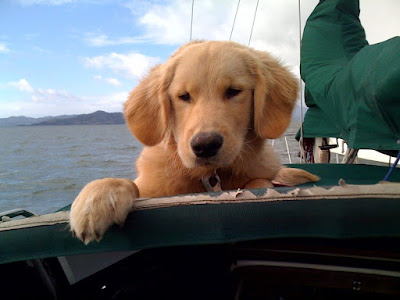 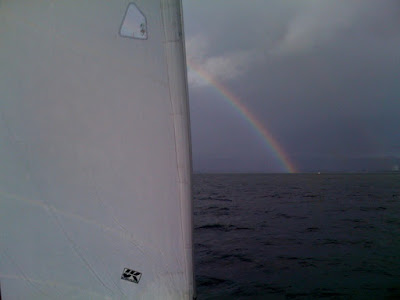 Went out yesterday with my buddy Kona and had a fantastic sail in a 16-18k breeze. Rain was to the south of us and then to the north near Mt. Tam. Then we got a little rain, but the sun poked thru and from where I was (between Angel and Treasure) there was an brilliant double rainbow over the bay. I could see the full 180 and it was such a cool sight. It gave me a chill and hope for the New Year! The boat was sailing very flat so my buddy Kona went up and spread out on the dodger. He was loving the breeze and so was I. It has been a fantastic year of sailing and enjoying friends on the bay and in the delta. From my sail in February with gusts over 50 knots, to 5 days in the delta, sailing on a 58 foot cat in the BVI's for a week, fireworks on the boat after a Giants game, KABOOM on the bay, a few spinnaker runs, taking Kona out on his first sail, spreading Sierra's (our former Golden) ashes out near the Golden Gate Bridge, and tons of solo sails that recharged the soul. 2008 has been another awesome year on the bay!
Posted by Fungod at 8:44 AM