Linux Based Sailboat to Cross the Atlantic 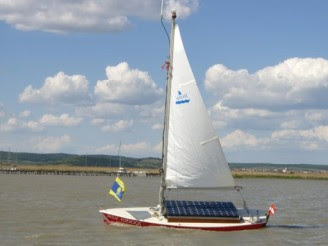 Few types of transport require as much thinking per mile as sailing. The sailor has to measure the speed and direction of both the water and the wind, which can constantly change, and then manage an array of sails and underwater hydrofoils at the correct angles to create motion in the desired direction. Navigation is its own challenge too, as it's impossible to sail directly into the wind and boats must 'tack' forward in zigzag patterns to make progress. All of which makes it quite remarkable that a group of European enthusiasts have created a Linux-brained autonomous sailboat bristling with sensors and capable of working its way around pre-set race courses or sailing to pretty much any nautical destination without any human intervention. Earlier this year, the ASV 'Roboat' became the first world robotic sailing champion at an event in Austria.

The ASV Roboat is a 3.75m Laerling - a beginner's sailboat that has been adapted to become a completely autonomous sailing vessel Boats-for-Busy-Sailors . The Laerling design was chosen because of its 60kg keel ballast and large, buoyant foam-filled body, which combine to make it very difficult to tip over and virtually unsinkable.

Once destination parameters are entered, the Roboat calculates and recalculates its route depending on the constant stream of data it receives. Chain-drive motors operate the mainsail, jib, rudder and boom to sail the boat to its destination.

The device has already proven itself able to take on short course race circuits effectively, winning the first World Robotic Sailing Championship against entries from Britain, Canada and Portugal earlier this year in Austria. The ASV team are planning a more ambitious voyage in the near future, looking to set the fastest time between Europe and the Caribbean, an eight-week journey of around 4,000 miles.

Competitive sailing is a highly intellectual sport that requires competitors to take all the available information and make solid decisions and calculated risks against what the opposition is doing. It's almost like a game of chess on water - and now that computer-controlled boats are proving themselves able to navigate the seas, it's only a matter of software and hardware upgrading until we see the first 'Deep Blue' of the deep blue sea, a boat capable of autonomously defeating the world's best sailors in an ancient battle of wits and wills. Could the America's Cup one day be taken by a robot entry? It seems an outrageous idea, but perhaps it's only a matter of good coding.

Loz Blain
Posted by Fungod at 6:21 AM