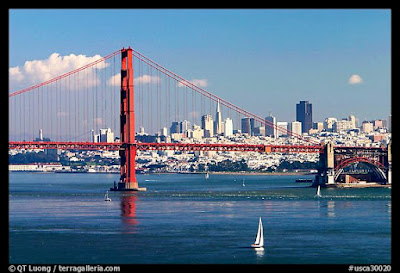 I just returned from a wonderful three day sojourn on the bay with my 5 month old puppy, Kona. The weather was due to get rainy and cold but we managed to stay dry and out of the wet stuff for the most part. We arrived up at the boat on Sunday evening and I turned on our little heater and it was cozy in no time. Watched the movie Wall E but soon was drifting off to sleep. It rained very hard a few times during the night. Kona was up and ready at 7am so we went for a walk in Emeryville. I could see the rain coming in and soon a big bolt of lighting greeted us and with it crashing thunder. We headed back to the warmth of the boat as it started to rain. After breakfast, another walk to get Kona tired. The wind was up and we cast off our lines bound for Sausalito. The wind was from the north so we were able to raise the sails quickly and head out. Once around the 2 mile long Berkeley Pier, we really took off and headed towards Racoon Strait. There was some big dark clouds headed our way so we headed north to avoid them. As I looked back, I could see the rain falling on the central bay but not on us. We headed towards Sams in Tiburon so Kona could take a little walk. As soon as we were back on board, it rained very hard. I had a little lunch and then the rain passed and we headed out again. We were able to sail right into the channel and very close to the slip I had on hold for the night. As soon as we tied up...rain again. We dodged the bullet twice in the last hour. After the rain ended, I took Kona to the beach and he loved it. Fetching his favorite ball was a treat. We headed back to the boat before more rain came and settled in for the night. I was tired and so after dinner took a nap that lasted to midnight. I need to get Kona out so we went for a little midnight stroll. Up in the morning, we took a nice walk to the next marina. It was blowing so we headed back to the boat to take off. Got out in the channel and put up the sails for a very nice sail towards the Gate. The wind direction changed and we bore off towards the city. I had been wanting to check out a new pier near the Ferry Building. We found Pier 1.5 and tied up. The wind was coming from the north east so it was very bouncy inside. We took a short walk and then returned. I was to meet with my sail buddy Dave at 5:30 so I needed to head back to Emeryville. The wind was blowing 25-30 and the waves were big. Had to tack many times but finally worked my way back. Kona was so good. Got back in and rested before Dave arrived. We talked and had some wine and then headed off to dinner at Chevy's. Had a very good time and was back in bed by 10pm.
It was crystal clear and the wind was blowing when we went for our morning walk. I had thought I would have a restful morning getting the boat back in shape. With such a beautiful day and wind, let's go sailing. We headed out in a light breeze at sunrise and soon we were doing over six knots in 10-12knot winds. We made it to Racoon in no time and set the hook just of Tiburon Point. Had a nice blueberry pancake breakfast and then headed back. Not much wind at first but then we were hitting 7 knots on the speedo. So glad we went out as it was so nice to be on the boat in such nice winds. Got back around noon and cleaned up and then headed home. This was my fourth winter cruise and one of the best! Kona you were awesome except when you got spooked by a bird and almost tripped me to the ground!
Posted by Fungod at 6:23 AM