Bonehead Move of the Year (and maybe the decade!) 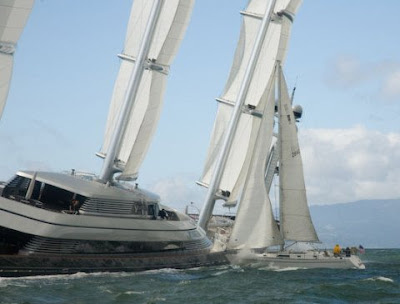 This award is not given out without a lot of thought and attention to detail. We do not give it out on an annual basis, but only when an act that is deserving and truly bonehead in nature. The 2008 Bonehead of the Year goes to: The sailors on the boat "Stand-By" who ran into one of the largest sailing yachts in the world, the Maltese Falcon (at 289 feet) in the San Francisco Bay in October. The Falcon was cruising the bay one glorious afternoon when Stand-by inexplicably rammed the Falcon. Here is what the owner, Tom Perkins, and others had to say about the incident, "A few minutes before this photo sequence was taken, the Falcon had turned to port, to give the right of way to the smaller yacht, which was to leeward on the starboard tack. The Stand-By was originally on a roughly reciprocal course to that of the Falcon. Prior to the photos shown here, Stand-By was bearing away, and the two yachts were on safe courses to pass roughly with a distance of 200 feet separation. After Stand-By had sailed past the Falcon's bow, the smaller vessel suddenly rounded up, possibly to tack in order to follow the Falcon, when she lost control. With her main sheeted hard in, the smaller boat was unable to bear away to avoid a collision. A San Francisco Bay Pilot was on the Falcon's bridge overseeing the Falcon's course at all times. The pilot is also an experienced sailor and sailboat owner. Because of the Falcon's tonnage, a licensed pilot is required whenever the yacht is underway, approaching, or inside the Bay. The Stand-By did not stop after the collision. The Falcon furled her sails and pursued the 40-footer under power, in order to determine her name and registration number. The pilot radioed the U.S. Coast Guard, which intercepted Stand-By and boarded her. The accident was caused by Stand-By's sudden change of course, which was much too quick to permit the Falcon to respond. The Falcon sustained damage to hull, capping rail, superstructure and main lower topsail, but fortunately there were no injuries to persons aboard either vessel."

We spoke to others who were aboard Falcon, such as Tad Lacey, who has been sailing and racing the Bay for more than 50 years, and they were dumbfounded at what happened. Lacey and the others said the boats were passing with no problem until Stand-By suddenly luffed up.

To add to this bonehead move, the folks on Stand-By tried to run and were tracked down by the Coast Guard and arrested. They were seen being taken away in handcuffs. Amazing! To my knowledge the folks on Stand-By never came forward to tell their side of the story. If anyone heard it, please pass it along.

If you are interested in seeing some interior pics of the Falcon, click here.
Posted by Fungod at 6:53 AM