I love this story and wanted to share it with you.

Every year, Australia hosts 543.7-mile (875-kilometer) endurance racing from Sydney to Melbourne. It is considered among the world's most grueling ultra-marathons. The race takes five days to complete and is normally only attempted by world-class athletes who train specially for the event. These athletes are typically less than 30 years old and backed by large companies such as Nike.
In 1983, a man named Cliff Young showed up at the start of this race. Cliff was 61 years old and wore overalls and work boots. To everyone's shock, Cliff wasn't a spectator. He picked up his race number and joined the other runners.
The press and other athletes became curious and questioned Cliff. They told him, "You're crazy, there's no way you can finish this race." To which he replied, "Yes I can. See, I grew up on a farm where we couldn't afford horses or tractors, and the whole time I was growing up, whenever the storms would roll in, I'd have to go out and round up the sheep. We had 2,000 sheep on 2,000 acres. Sometimes I would have to run those sheep for two or three days. It took a long time, but I'd always catch them. I believe I can run this race."
When the race started, the pros quickly left Cliff behind. The crowds and television audience were entertained because Cliff didn't even run properly; he appeared to shuffle. Many even feared for the old farmer's safety.


The Tortoise and the Hare 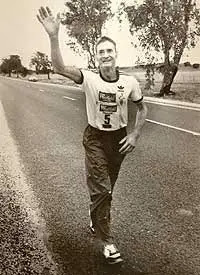 All of the professional athletes knew that it took about 5 days to finish the race. In order to compete, one had to run about 18 hours a day and sleep the remaining 6 hours. The thing is, Cliff Young didn't know that!
When the morning of the second day came, everyone was in for another surprise. Not only was Cliff still in the race, he had continued jogging all night.
Eventually Cliff was asked about his tactics for the rest of the race. To everyone's disbelief, he claimed he would run straight through to the finish without sleeping.
Cliff kept running. Each night he came a little closer to the leading pack. By the final night, he had surpassed all of the young, world-class athletes. He was the first competitor to cross the finish line and he set a new course record.
When Cliff was awarded the winning prize of $10,000, he said he didn't know there was a prize and insisted that he did not enter for the money. He ended up giving all of his winnings to several other runners, an act that endeared him to all of Australia.

In the following year, Cliff entered the same race and took 7th place. Not even a displaced hip during the race stopped him.
Cliff came to prominence again in 1997, aged 76, when he attempted to raise money for homeless children by running around Australia's border. He completed 6,520 kilometers of the 16,000-kilometer run before he had to pull out because his only crew member became ill. Cliff Young passed away in 2003 at age 81.
Today, the "Young-shuffle" has been adopted by ultra-marathon runners because it is considered more energy-efficient. At least three champions of the Sydney to Melbourne race have used the shuffle to win the race. Furthermore, during the Sydney to Melbourne race, modern competitors do not sleep. Winning the race requires runners to go all night as well as all day, just like Cliff Young.