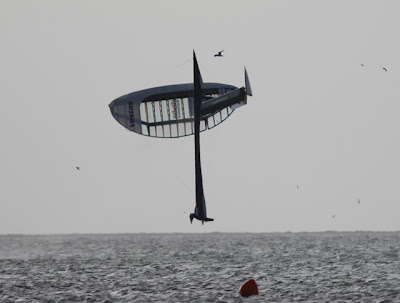 No it's the Vestas Sailrocket just after they had set the world speed record for a sailboat of 47.4 knots over the 500 meter course. Their high speed was 51.7.

“As soon as the whole nose lifted I thought ‘oh s**t... we had discussed the possibility of this and here we are’. The nose just kept coming up and I was pure and simply flying. No noise, no spray... she just kept going up until I was vertical. I waited for an impact but there was none. When she went fully inverted and there was still no impact I knew I was a long way up...at least the height of the rig. At this stage I thought ‘when she hits upside down... get out as soon as you can’. She slammed down hard and despite a few bruises and a smashed helmet... I was out of that cockpit in a flash. It was pretty gutting but then it comes with the turf. We are sailing prototype craft to new extremes here. The team will gather round and we will be back in action as soon as possible. I have no doubt that with a few tweaks to the geometry we could have absolutely smashed the outright and nautical mile records(having done 1000 meters at 46.4 knots). The dream is real!”

For more info including pictures and vids, click here.
Posted by Fungod at 1:56 PM