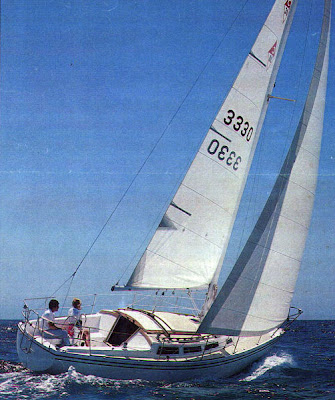 As I walked about the Yacht Basin Marina in Holland, Michigan, last summer, I noticed that there were just a few sailboats that actually got out on the weekend and even fewer that made it to some of the Wednesday night races.

Most of the boats, especially the larger cruising boats, sat there week after week, patiently waiting for their owners to rescue them from terminal boredom. It kind of reminded me of horses I have seen in stables that never got exercised. I felt bad for the horses and for the boats, not to mention the owners who have invested a sizeable amount of time and money in them.

On the other hand, there were a few fortunate guys like me who did get out on Lake Michigan a lot, probably more than we deserved. I kept a ship’s log with the details of each trip: miles traveled, fastest observed wind, highest speed reached, specific hours of the day out on the water and any other noteworthy happening. At season’s end I was reviewing miles traveled and found it was 1,120 nautical miles, which is in line with the miles traveled in each of the previous two years. Those miles were accumulated in part on 20 Wednesday night races and in the Anchorage Cup that runs from Grand Haven to Holland, a distance of about 20 miles. Most of the Wednesday night races put about 15 miles on the boat, accounting for about 300 of the 1,100 miles. So where did the other 800 miles come from?

Daysailing. I’m of the opinion that the essence of the pure sailing experience is that two- to four-hour daysail that takes place in the early afternoon for those of us lucky enough to be retired or just after work (or maybe on a long lunch) for the gainfully employed. You slip your lines, in my case usually alone, or with a few friends and you’re away. You can hoist sails 100 yards away from your berth or wait until you’re out on Lake Michigan, but in either case you’re away and moving on the water.

In Holland we have a choice of lakes, so I can sail on Lake Macatawa, a six-mile-long lake that connects to the big lake, or I can get out to Lake Michigan and enjoy all that it offers. Often the smaller lake has better wind, particularly late in the day.

Imagine being out on the big lake in a pretty daysailer, winds out of the southwest at about 10 to 12 knots, with just the beginning of whitecaps here and there. The English liked to describe those first whitecaps as “seeing a few sheep in the meadow.” You’re close-hauled, hearing the thup, thup of waves against the sides and notice that your boat speed is about half the apparent wind, confirming your opinion that the sail trim is pretty good at the moment. Of all the places on the planet you could be, this has to be one of the best. No, this is the best. I have often wished that anyone who ever wondered what it would be like to be sailing were on board right then. The experience is just too sweet. You’re drinking from the golden cup of daysailing and you can never get enough.

So, how many times would you think I could do that in a summer’s season? Ninety-four times. You went sailing 94 times in one season? Eleven hundred miles of sailing from mid-April through mid-October, mostly daysailing? Isn’t that overdoing it a bit? I plead guilty, your honor, guilty as charged.

On the other hand, the actuarial tables don’t offer much comfort once you reach retirement age. If you live 20 years past your last day at work, you’ve only got 7,300 days to go. Take about half of those away because of the cold weather seasons and the frailties of old age, and you might have 3,650 days or 10 years of sailing left, if you’re lucky. I’m going to try and do more next season because the more I think about it, I’m probably not overdoing it at all.

When I was thinking about ordering this boat back in late 2005, my better half objected to my selling my 4-year-old Colgate 26 in favor of the new boat. She called an old friend, Alan Ware, hoping to get his support to talk me out of a new Alerion Express 28. He thought about it for a few minutes, then said, “Nancy, we are dead a long time. Let him have his boat.”

This year, when you’re fitting out your boat with the best of intentions for a summer of sailing, promise yourself you’ll do it this year. Say after me, “In 2009, I resolve to sail my boat at least 50 times.”

We busted our asses last year to sail as much as we could. We got 29 sails in from July 4th (engine trouble delayed me until then) and then we hauled in October.