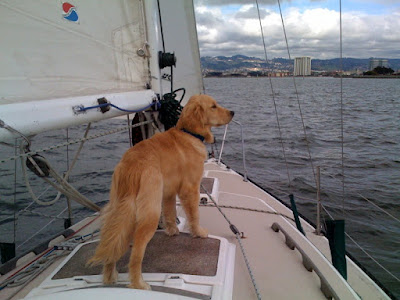 Rainy and overcast is how my Sunday started. Lots of dark clouds to the north where the boat sits. Went for a nice run in the hills with Kona and then made some calls to see if my crew was in or out. Three dropped out but two were game even if it was raining. My wipers were on full as I approached the boat. Maybe I made the wrong call. The good news: it was blowing hard from the south. Took off around noon and in less than 5 minutes were were on a port tack across the bay. Randy, Dave, Kona and I had a fresh breeze and cruising effortlessly at 7+ knots and the boat was flat. Randy was very comfortable behind the wheel so we let him charge towards the Gate. Had a nice lunch as we sailed with no one around us. Reefed the jib to about 75% and started hitting 8+ on the speedo. With no tacks and 2 hours later we were at the Golden Gate Bridge. It was misting pretty good so we headed down wind and back towards the Bay Bridge. It seemed we had an invisible shield on as no one was around us all day. We had a few periods of nice sun and blue skies as well as lots of south wind. We made it back around 4pm and happy we made the trip. It was another awesome day on the bay!!
Posted by Fungod at 9:25 AM

That looks like a nice boat. Seems great for a lazy afternoon sail down the calm sea. Problem is when something crashed. Good thing there are now lots of suppliers of boats and kayaking supplies out there. Saves you the trouble of buying a new boat (costly!). Hehe