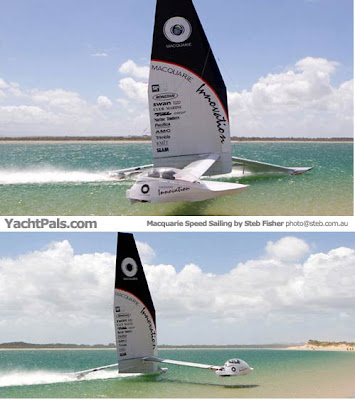 Sandy Point, Australia - Last year, the 50 knot (average over 500m) barrier was broken by a sailing craft, but not a boat. This week, an Australian team was able to break the 50 knot barrier aboard Macquarie Innovation, to become the fastest sailing boat in history*. In only 24 knot winds at Sandy Point, Macquarie Innovation averaged 50.43 knots over the 500 meter speed sailing course, and reached a top speed of 54.23 knots. After some fact-checking with both the WSSRC and the team, it looks like the 50.43 number is high, and that once adjustments are made for tidal movement, the official speed will be in the neighborhood of 50.08 knots (we won't have the true number for some weeks to come). So the 50 knot barrier seems to have been broken, finally, by a boat, but some are posing the question as to weather this, SailRocket, Wot Rocket and similar designs are actually "boats" at all. Well, yes they are.

Generally speaking, you get ON a watercraft, but you get IN a boat. So, a kite-board is not a boat, but it is a watercraft, and a sailing craft. Lasers? Sunfish? If it's got a footwell or a cockpit, it's a boat. Common wisdom also lends itself to the definition of a yacht: A yacht is a private boat with in-cabin accommodations for sleeping and cooking, however spartan. Thus, a Flicka is a yacht, and despite its larger size, an Extreme 40 is a boat. That's pretty much the accepted definition (though it sometimes blurs a bit), and nobody really cares to nitpick, until it comes time for record-making.

So, to end the confusion: Since it has a cockpit, Macquarie Innovation is a boat - the fastest sailing boat there is*. The fastest man under sail is Alexandre Caizergues, whose sailing craft was not a boat, but made 50.57 knots over 500 meters. The fastest yacht in the world is the hydrofoil trimaran l'Hydroptere, which averaged 46.88 knots over 500m. Thus, there are three different records: Fastest boat, fastest yacht, and fastest person under sail. Got it? Good, now if someone were to waterski barefoot behind a kite at 60 knots, what would that mean?
Posted by Fungod at 7:08 AM