You Build It, They Will Come 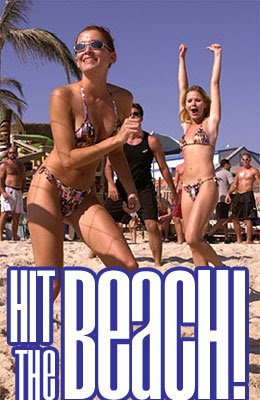 A few years ago I was on a road trip with my best friend from my early childhood, Steve Peterson. We had been playing in a championship Ultimate tourney down in San Diego. We were heading back up the coast and we stopped by Zuma Beach in Malibu. It was a gray, dreary morning but we made the best of it with a Frisbee toss and some laughs. After a while, I mentioned we should set up the volleyball net. Steve questioned me because there was no one around to play with. And then I said those famous words in the title. So we set it up and just as we finished, three white vans pulled up in the parking lot. A smile lit our faces when we saw the Playboy logo on each of the vans. Playmates! Turns out they were filming a segment for Playboy TV right next to our volleyball net! Maybe we can get an invite as extras! After a while some of the girls came over and asked if we wanted to play some volleyball. Of course! Maybe we could get an invite to the mansion for an after party! Turned out these gals were the make up crew. They were great and we had a blast finding out more about them. During the breaks the cast and crew would come over for a game or two and we had a ton of fun as the day turned sunny and warm. We continued up the coast later in the day and had more adventures in Big Sur. Hey Steve, love you man!
Posted by Fungod at 7:57 AM